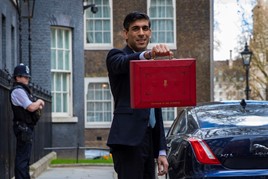 The Chancellor has announced new company car tax rates in a Budget dominated by measures to lessen the economic impact of Coronavirus.

Rishi Sunak warned MPs in the House of Commons that there would be a “significant but temporary disruption” to the UK economy but insisted "we will get through this together”.

Earlier today (Wednesday, March 11), the Bank of England announced an emergency cut in interest rates from 0.75% to 0.25% in a bid to support the economy during the virus outbreak.

Sunak said: "We are doing everything we can to keep this country and our people healthy and financially secure."

The fleet industry has been waiting for the new benefit-in-kind (BIK) tax rates to be officially adopted since July 2019, when HM Treasury published how it intended to change them to counter the impact of the new emissions testing regime – the Worldwide Harmonsied Light Vehicle Test Procedure (WLTP).

The new company car tax rates were expected to be rubber stamped in the Autumn Budget, ahead of coming into force from April 2020. However, continuing deadlock over Brexit put the new BIK rates and the required legislation on hold, after the Government decided to go to the polls.

Nevertheless, the fleet and leasing industry will be relieved that the Budget confirms that new company car tax rates, published last year, will now be adopted.

Claire Evans, head of fleet consultancy at Zenith, said: “The fleet industry will take real confidence from the confirmation of benefit-in-kind (BiK) tax rates and the further announcement they will be frozen at 2022/23 levels for an additional two years.

“It gives the industry the certainty it needs and provides a commitment to low rates for drivers of EVs.”

For cars first registered from April 6, 2020, most company car tax rates will be reduced by two percentage points, with a new zero percentage rate for pure electric vehicles (EVs).

In the tax year 2022 to 2023, the increase will bring the percentages back to their published rates in existing legislation.

The measure includes changes to the appropriate percentage figures for all cars classified as being zero-emission vehicles under both the NEDC and WLTP test procedures (see table below).

In the tax year 2022 to 2023, the increase will bring the appropriate percentage back to their published rates in existing legislation which will be sustained throughout the tax years 2023 to 2024 and 2024 to 2025.

Eduarda Thomas, principal consultant at Lex Autolease, said: “The publication of company car tax rates beyond 2023 is a hugely welcome shot in the arm for the fleet market and gives decision makers the clarity they need to invest in greener fleets now.

“Fleets typically plan in five to 10-year cycles, and confident purchasing decisions cannot be made without sight of future tax liabilities.

“We are optimistic that the lack of clarity in recent years is behind us and hope that five-year visibility is maintained in the years to come.”

For cars registered between 1 October 1999 and 5 April 2020 inclusive, the measure clarifies that the CO2 emissions figures for company car tax and related charges will continue to be based under the New European Driving Cycle (NEDC) procedure.

The new company car tax rates will now have to be adopted into law via the Finance Bill. However, it will need to pass through both houses of Parliament taking it beyond April 6, which means company car drivers will be issued with tax information quoting the old rates before the new rates can be applied retrospectively.

Tom Brewer, head of sales and marketing at VWFS Fleet, said: "We are pleased to see the government taking real steps to help businesses lower their emissions for good.

"We hope that company car drivers and fleet managers feel incentivised to make the transition to electric vehicles on their road to zero."

The Government announced that the fuel duty freeze will continue for a further year. Ashley Barnett, head of fleet consultancy at Lex Autolease, said: “While the ultimate goal is to remove traditionally-fuelled vehicles from our roads, it can’t happen overnight, as too many people are reliant on a private vehicle for their way of life, and can’t currently afford an EV.

“As the momentum shifts away from petrol and diesel, there will come a time where an increase in fuel duty is appropriate and will help fund investment in greener alternatives.”

The Government  says it is considering the long-term future of incentives for zero emission vehicles alongside the 2040 phase-out date consultation.

Recognising that the market for other ultra-low emission vehicles is still very small, the Government will also provide £129.5m to extend the Plug-in Grants for vans, taxis and motorcycles to 2022-23.

Barnett said: "We welcome the Government’s decision to keep the plug-in car grant in place until at least 2022/3.

“As plug-in vehicles move towards parity with traditionally-fuelled vehicles, government funding can be reduced and ultimately phased out. This is an important, positive moment on the UK’s Road to Zero journey.”

In addition, the Chancellor announced the removal of Vehicle Excise Duty (VED) for zero-emission cars with a list price exceeding £40,000, starting from April 2020.

Barnett said: “Removing the VED surcharge for EVs will encourage uptake, many of which have list prices higher than the £40,000 threshold.

“The threshold was put in place to identify and apply a surcharge to ‘luxury’ cars, but as times have changed, even entry-level models featuring the newest, cleanest engine technology can come with a similar price tag.

“It’s positive that early adopters of EVs are being incentivised by these changes, rather than being penalised by an outdated tax system."

There was also an announcement around Capital Allowances. Legislation will be introduced to extend the 100% First Year Allowances (FYAs) for low CO2 emission cars, zero-emission goods vehicles and equipment for gas refuelling stations by four years from April 2021.

Legislation will be introduced to reduce the CO2 emission thresholds from April 2021, which determine the rate of capital allowances available through which the capital expenditure for business cars can be written down.

The new 50g/km threshold will also apply for determining the lease rental restriction for costs of hiring business cars for more than 45 consecutive days.

Nigel Morris, tax director at MHA MacIntyre Hudson, said: "The proposal to retain the ability for businesses to reclaim 100% First Year Allowances on the purchase of a zero emission vehicle up to April 2025 will help some companies to fund the additional costs of an EV over an ICE (internal combustion engine) car with the accelerated allowances.

"However, moving vehicles with a CO2 rating of between 1g/km and 50 g/km into the standard writing down pools will increase the period of time over which capital allowances for those vehicles can be claimed."

The Government says that access to high quality, convenient charging infrastructure is critical for drivers to make the switch to electric vehicles confidently.

It has therefore announced £500 million over the next five years to support the rollout of a fast-charging network for electric vehicles, ensuring that drivers will never be further than 30 miles from a rapid charging station.

This will include a Rapid Charging Fund to help businesses with the cost of connecting fast charge points to the electricity grid.

To target spending from this fund effectively, the Office for Low Emission Vehicles will complete a comprehensive electric vehicle charging infrastructure review.

Justin Benson, UK Head of automotive at KPMG, said: “The Government’s willingness to support clean vehicle technologies to improve air quality and the environment is important.

“Whilst regulation is already in place for cleaner vehicles on the road, cutting taxes on these is the right way forward, particularly to boost consumer demand. This will also encourage car manufacturers to develop these cleaner technologies more quickly.

“Another boon for the sector is the £500m announced for car charging hubs, which should help to alleviate range anxiety for consumers interested in electric vehicles.

“However, whether this is new money – and not the £400m announced via the Industrial Strategy - remains to be seen. So watch this space, as more detail is needed.”

The Government will remove the entitlement to use red diesel from April 2022, except in agriculture, fish farming, rail and for non-commercial heating (including domestic heating).

By removing this tax relief on pollution, the Government says it will encourage businesses and industry to improve the energy efficiency of their vehicles and machinery or look for greener alternatives. The development of these alternatives will be supported by the government more than doubling its investment in the Energy Innovation Programme.

The Government says it is committed to bringing roadside concentrations of polluting nitrogen dioxide gas within legal limits in the shortest possible time.

The Government has announced the largest ever investment in England’s motorways and major A roads.

It will take forward schemes such as dualling the A66 Trans-Pennine and upgrading the A46 Newark bypass to address congestion, and building the Lower Thames Crossing to increase road capacity across the Thames east of London by 90%.

The Government is also investing £20m to develop the Midlands Rail Hub, progressing plans for a major programme of improvements to rail services across these regions.

Furthermore, it said it will make an “unprecedented investment” in urban transport, starting by confirming allocations of over £1bn from the Transforming Cities Fund.

This will deliver a range of local transport schemes, including an iconic new Central Park Bridge in Plymouth, a significant increase in the capacity of the Tyne and Wear Metro, and new cycleways in Bournemouth, Christchurch and Poole.

In line with the Government’s priorities, this will also include around £800m for bus and cycling infrastructure.

The Budget announces a new Potholes Fund that will provide £500m a year, resulting in a 50% increase to local road maintenance budgets in 2020-21.

Furthermore, the Budget confirms the development of 15 local road upgrades across the country, helping to reduce congestion.

These include junction improvements to the A350 in Wiltshire, a link road connecting Chesterfield to Staveley, and a dual carriageway in Warwickshire.

Do you think it was a good Budget for the fleet industry? Vote in our poll by clicking here.

For further analysis and fleet reaction on the Budget, see the March 26th edition of Fleet News.

Fleet Poll
Have you recently received an incorrect tax code for a company car from HMRC?
Vote
View all
64