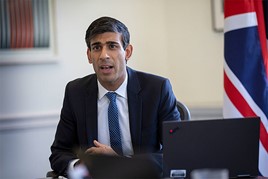 Roads pricing plans are likely to be revived in a bid to stem the estimated £40bn tax revenue that will be lost as new car buyers switch to electric vehicles (EVs), according to a report by The Times.

The paper claims that Chancellor Rishi Sunak was presented with a Treasury paper that outlines a nationwide road pricing scheme and he is “very interested” in the idea.

Replacing the estimated £40bn of annual tax revenue from fuel duty and vehicle excise duty (VED) is becoming a higher priority for the Treasury as the shift to EVs gathers pace.

Incentives to boost the sales of EVs include zero VED in the first year and 0% benefit-in-kind tax.

Fuel duty tax, which currently contributes some £28bn per year (excluding VAT) to the public purse, will also diminish as fewer petrol and diesel cars are used on British roads.

The Government is expected to announce that its proposed ban on the sale of new petrol and diesel cars will be brought forward to 2030, later this week, having initially been billed for 2040.

Edmund King, AA president, said: “While the push toward electric vehicles is good for the environment, it is not good for the Exchequer.”

The AA has proposed ‘Road Miles’ whereby every driver gets 3000 free ‘miles’, with one third more for those in rural areas, and then a small charge thereafter.

“Combined with commercialising the roads with an adopt a highway scheme with naming rights such as the Minecraft M1, Manchester Utd M6 or Adidas A1, this should be prove a more popular solution,” King added.

RAC head of roads policy Nicholas Lyes said: “While not paying car tax is clearly an incentive to go fully electric at the moment, we will very soon need a system that can levy tax on both conventionally fuelled and battery electric vehicles fairly. If this isn’t addressed, we risk finding ourselves in a situation where petrol and diesel drivers continue to pay all the tax for using the roads which is unsustainable.

RAC research shows around four-in-10 drivers believe that some form of ‘pay-per mile’ system would be fairer than the current system of fuel duty, while half (49%) agree that the more someone drives the more they should pay in tax. Drivers are also clear that tax revenues from any replacement for fuel duty should be solely reinvested back into the road network.