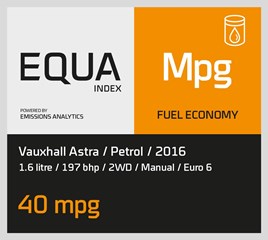 The project is the largest of its kind in Europe and data is free to access at the EQUA index website.

Research by Emissions Analytics has found that in 2016 the average shortfall between official and real-world fuel economy results has reached 29%, with some vehicles more than 40% adrift.

Over the last two years the average real-world fuel economy of cars fell for the first time ever, down to 40mpg from 41mpg. Diesel cars were worst affected, falling from 45mpg to 42mpg over the same period – likely due to downsized engines which need to be worked harder.

To compile the data, Emissions Analytics has tested hundreds of cars in standardised, on-road conditions. The programme joins the growing range of tools from Emissions Analytics which cover emissions of nitrogen oxides and poisonous carbon monoxide.