Fleet demand for EVs rising at ‘a rapid rate’ 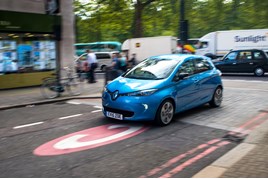 Plug-in cars could be poised for a substantial increase in take-up by businesses from 2017, as fleets and drivers take advantage of increased choice, improved battery capacity and lower taxation.

The range of plug-in hybrids and electric vehicles (EVs) is set to double in the next five years, while benefit-in-kind (BIK) tax rates are likely to remain substantially lower (even before the dramatic falls in 2020/21 for EVs), maintaining their attractiveness to drivers as company cars.

Manufacturers will be introducing plug-in cars for the first time, while others will be boosting their numbers of products with EV capability, or renewing their efforts to offer attractive ultra-low CO2 options.

Although there were major changes to the plug-in car grant in 2016, with a reduction in the amount of cash available and a graded structure based on the EV range and emissions of hybrids, it doesn’t seem to have deterred customers.

When it was launched, all qualifying plug-in cars were eligible for a £5,000, whereas now, fully electric cars can claim £4,500, with plug-in hybrids earmarked for £2,500 off, provided they meet the requirements of plug-in range, CO2 emissions and price.

For example, a Volvo XC90 T8 qualified before the 2016 changes, but, although it meets the CO2 and plug-in range criteria, the maximum value of a hybrid qualifying for the grant is now £60,000.

While company car drivers choosing plug-in cars will see the steepest percentage increases in BIK tax payments in the next few years, compared to drivers of similar conventional cars, many of them will remain better off.

Anyone choosing a plug-in car with CO2 emissions of up to 50g/km will pay BIK tax at 9% for 2017-18 – a significantly lower rate than cars without EV capability.

And while drivers stand to benefit, many fleet operators will also be able to run a plug-in car at a lower cost than a conventional fuelled car. The Mitsubishi Outlander PHEV has a slightly higher overall running cost over four years/80,000 miles than the diesel version.

But, taking account of the employers’ National Insurance contributions, the equation swings back in favour of the PHEV.

Jaguar recently revealed a compact crossover EV, the I-Pace, which is destined to be transformed into a production car by 2018. Since Jaguar will be using the technology, it’s likely EVs will feature in sister brand Land Rover’s future model strategy, to take advantage of economies of scale with battery and motor technology, although no formal announcement has been made.

Volkswagen Group already offers plug-in hybrids in the Volkswagen, Audi and Porsche ranges, as well as two Volkswagen EVs. The group has committed to 20 cars with EV propulsion by 2020, which will see choice expanded greatly over the next few years, and even includes plug-in hybrid technology in the Bentley Bentayga luxury SUV.

And some of Europe’s biggest car manufacturers are planning a major investment in improving the infrastructure for super-fast charging across the continent, making longer journeys by electric vehicles more achievable and boosting the take-up of the next generation of plug-in cars.

The network will be based on Combined Charging System (CCS) standard technology. The planned charging infrastructure expands the existing technical standard for AC and DC charging of electric vehicles to the next level of capacity for DC fast charging with up to 350kW. EVs that are engineered to accept this full power of the charge stations can recharge in a fraction of the time of today’s plug-in cars.

Ford, BMW, Daimler and VW Group (including Porsche and Audi) have agreed to help boost the number of charging stations from next year. An initial target of about 400 sites in Europe is planned, and, by 2020, customers should have access to thousands of high-powered charging points.

The objective is to enable long-distance travel through open-network charging stations along major routes, which has not been feasible for most EV drivers to date. The charging experience is expected to evolve to be as convenient as refuel-ling at conventional filling stations.

Mercedes-Benz, for example, is seeking to launch a hydrogen fuel cell car with a rechargeable battery that can deliver 30 miles of range when the hydrogen level is low and reaching a refuelling point is doubtful.

Organisations supporting the uptake of plug-in vehicles believe they will become an increasingly common feature of fleet choice lists.

Poppy Welch, head of Go Ultra Low, said: “Fleet registrations for electric vehicles are growing at a rapid rate, and even faster than plug-in vehicle uptake among private consumers.

“There have been 22,784 fleet registrations so far in 2016, outstripping the total recorded this time last year by 54%. Since the introduction of the Plug-in Car Grant in 2011, more than 80,000 plug-in hybrid and pure electric cars have been registered in the UK with consumers and businesses benefitting from low running costs and beneficial taxation.

“Our research shows only 25% of UK businesses offer EVs to employees as company cars – with almost 70% of user-choosers saying they would consider an electric car if the technology was made available to them.

“With recent Government investment in workplace charging initiatives, as well as improving technology from vehicle manufacturers, we expect EVs to be even more popular with businesses and their employees next year and beyond.”

Fleets must start planning for the transition to electric vehicles now

Fleets need to assess impact of stricter emissions laws and evaluate residual value risk as the Chancellor signposts and electric future, according to a new white paper from Sewells Research & Insight.