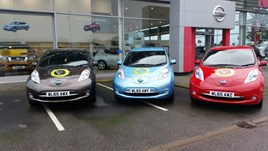 C&C Taxis is to continue with its all-electric vehicle strategy after successfully de-fleeting its first EV, a second-generation Nissan Leaf, after 174,000 miles with no breakdowns and “minimal” servicing costs.

The car was 7kw fast-charged 3,800 times and 3.3kw trickle-charged 7,000 times during its working life at the company’s business in St Austell, Cornwall.

Mark Richards, C&C transport manager, was impressed that the Leaf retained 70% of its battery capacity after 174,000 miles and said that other than the maximum range, the perform-ance of the vehicle is just as good as the day it was bought.

Richards has transitioned his entire 13-car taxi fleet from diesel to pure electric vehicle (EV) over the past four years and, while the fleet is small, it has become one of the most experienced at running EVs in the UK.

C&C has 12 Leafs and one e-NV200 seven-seater. It bought the EV it calls “Wizzy” outright in July 2013 after Richards was convinced to test drive one by reading a review in a magazine.

He said: “We’re a small family-owned company and while some fleets have dabbled and will run one vehicle on a fleet of hundreds, we’ve fully committed to EVs as the future of our business. I can’t imagine going back to diesels now.”

C&C buys its EVs outright, a strategy Richards feels is justified by the fact that on average, “they become cost-neutral after two years and four months of ownership on fuel savings alone”.

Wizzy had no breakdowns during its high-mileage four-year working life. Outside of scheduled annual services, the Leaf went through three sets of wipers, two sets of brake pads for the front and rear and one damper, as well as tyre replacements when necessary.

Richards said: “With an equivalent diesel taxi doing that sort of mileage you’d be looking at things like replacing a clutch and that sort of work can see the car out of the business for three days.

“For us, that length of downtime can hurt the business, but we haven’t had that problem with the EVs. The service and maintenance savings are impressive.”

C&C uses British Gas for its electricity on a business tariff and its depot has three 7kw DBT fast chargers and three DBT 3.3kw trickle chargers. Richards said that while managing charge points and electricity has been relatively simple to administer for the business, transitioning drivers from diesel to pure EV has not been an easy task.

All the EV taxis are tracked with a GPS system that the taxi controller keeps a close eye on to help drivers manage the number of jobs and the electric range available.

Some drivers will work in the morning, running the battery down to 20% or 30%, break for lunch and top up and then head out with 100% range for the evening. Other drivers will come back to base in their downtime to top up dependent on the flow of work on a particular day.

“There was a learning curve at the start but we are in a place where the controllers and the drivers are experienced with these vehicles and we have learned how far you can push them,” explained Richards.

Drivers now prefer EVs, as they feel less fatigued after a day of driving due to the stress-free “silky smooth” nature of how they drive.

He believes the Leaf also stands up well as a used car prospect. He said: “I think we could go on indefinitely with Wizzy but we’re in a position where new models are coming out with better ranges and we want nice fresh interiors and bodywork.

“I don’t see why you couldn’t continue to run a Leaf based on the reliability we have seen.”