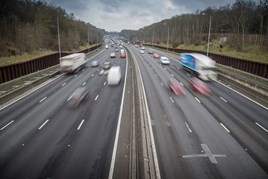 The main construction of a fourth lane on the M3 in Surrey and Hampshire has been completed.

The £174 million project has seen the M3 converted into a smart motorway.

Open for traffic in both directions, work to test and commission the new smart motorway technology will continue for a short period, with the fully upgraded road opening to traffic later in July.

A 50mph limit is in place for safety reasons while this work is carried out.

The upgrade has converted the hard shoulder of a 13.4 mile section of the M3 between Farnborough and the M25 to an extra traffic lane.

When the testing and commissioning is complete, after approximately three weeks, the speed restriction will be lifted and all four lanes will operate at 70mph in normal conditions.

"Drivers will also see better information about conditions on the road ahead and enjoy smoother journeys on the fully resurfaced road – as well as the smart motorway upgrade, we have also been carrying out the most extensive maintenance on the M3 since it was first built in 1971 in parallel with the smart motorway works.

“I would also like to thank drivers for their co-operation and understanding during the final testing phase and hope they enjoy the improved journeys between London and the south coast.”

Work on major maintenance being carried out alongside the project is also substantially complete, but some activities - including the rebuilding of the Woodlands Lane bridge over the M3 near Windlesham - will continue until later in the year. None of this maintenance will require any permanent traffic restrictions on the M3.

The Government is predicting that ‘smart’ motorways, which convert the hard shoulder to a running lane, will boost capacity by a third and improve journey times up to 10% on the M1 and 15% on the M3.