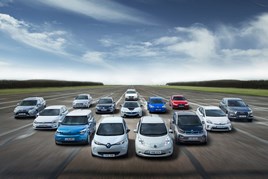 Nearly half (48%) of businesses who employ drivers are confused by the Government’s plans to stop the sale of new conventionally-powered petrol and diesel cars from 2040.

Manufacturers are expected to have moved to offer hybrid and EV versions of their product ranges way before the 2040 deadline, with many companies already outlining their model plans from 2019 onwards.

A new report released by Thecarpeople.co.uk titled ‘diesel impact’ shows many businesses are questioning their vehicle purchases with almost half not fully understanding the 2040 ban.

The report also shows 39% of businesses admitting they are concerned about the impact the proposed combustion engine changes will have on their company finances.

While 1 in 5 actually think the ban will have a positive impact on their work, only 43% of those who have a transport business are planning to train employees to drive/fix/work with hybrid and electric vehicles.

Thecarpeople report shows 45% of business decision makers are concerned about the availability of trained mechanics for hybrid and electric vehicles with their biggest concerns being revealed as accessibility to charging points for electric cars (40%), unknown expenses for car charging (37%) and the possible increase in taxes/charges for driving petrol/diesel vehicles (34%).

The diesel impact report shows the biggest worries around the 2040 plans:

Demand for diesel drops by almost a third

Concern mounts that Government could target diesel vehicles in the Budget

The Chancellor is thought to be considering a 1 pence per litre (ppl) hike in diesel duty, while cutting petrol duty by the same amount, in tomorrow’s budget.