Demand for diesel drops by almost a third

The UK new car market declined for a seventh consecutive month in October, with diesel demand falling by almost a third, with 29.9% fewer registrations.

There were 158,192 new units registered, with overall demand down by 12.2% in the month, according to figures released today by the Society of Motor Manufacturers and Traders (SMMT).

Meanwhile, dealers also reported a fall in demand, with 10.1% fewer private buyers taking delivery of new cars in the month.

Mike Hawes, SMMT chief executive, said: “Declining business and consumer confidence is undoubtedly affecting demand in the new car market but this is being compounded by confusion over government policy on diesel.

“Consumers need urgent reassurance that the latest, low emission diesel cars on sale will not face any bans, charges or other restrictions, anywhere in the UK.

“We urge the Government to use the forthcoming Autumn Budget to restore stability to the market, encouraging the purchase of the latest low emission vehicles as fleet renewal is the fastest and most effective way of addressing air quality concerns.”

Alternatively Fuelled Vehicle (AFV) demand continued to rise, up 36.9% to 8,244 registrations, while petrol models enjoyed a more modest growth of 2.7%. However, these gains were unable to offset heavy losses
in the diesel segment, as continuing consumer concerns resulted in its biggest hit yet, with demand
down 29.9%.

Alex Buttle, from car buying comparison website Motorway.co.uk, said: “Diesel's market share is plummeting and consumers aren’t listening to rhetoric about cleaner diesel models, however much the industry drums on about it. The damage has been done.

“While it's understandable the SMMT is not deserting diesel and urging the Government to act to reassure consumers that new diesel cars will be ‘safe’ from toxin tax punishment, is this a lost cause?

“Maybe it's time focus is shifted towards giving attractive tax incentives for purchasing alternative fuel vehicles to encourage growth in this area.”

He said: “In the longer term this correction in sales is positive for the market, and should reduce concerns of new car oversupply impacting negatively on used car values. We must also remember Brexit has already had an impact on the UK car market through the fundamental shift in the exchange rate which is impacting car prices, making the market correction even more understandable.

“Whilst many – including ourselves – openly expected this correction in sales, it’s more complicated to predict exactly where they will go as we move into 2018. Whilst I expect we’ll see a small level of further softening continue into next year, this is mainly because Q1 2017 was so strong.

“Looking beyond that the uncertainties still facing the UK economy make it difficult to make a robust forecast for 2018 as a whole, however the determinants such as UK GDP and employment levels remain robust.

“It’s also worth noting that although we see a continued fall in demand for diesel, this remains an appropriate fuel choice for many drivers.

“Whilst we welcome the ongoing growth in popularity of electric vehicles, we are still at least five years away from them taking a material market share and so traditional fuel types will have a significant role to play for many years to come.”

General uncertainty is making businesses and consumers reluctant to make buying decisions, according to Andy Hartley, commercial director at Lex Autolease. "When you couple that uncertainty with last week’s largely expected interest rate rise, and the potential for a change to the tax treatment of diesel vehicles in the Autumn Budget, it’s easy to see why vehicle purchases are being delayed," he said.

“The pace of take-up of Alternative Fuelled Vehicles (AFVs) is encouraging, but crucial to drivers and fleets seeing the environmental and cost-benefits of AFVs is driver behaviour. Many drivers of plug-in hybrids in particular fail to charge-up regularly, meaning the majority of the time the vehicle is no greener or any more cost-effective than its traditional fuelled counterpart.

"Fleets adopting a more AFV-focused vehicle policy need to invest in driver training to realise the full benefits of these vehicles.” 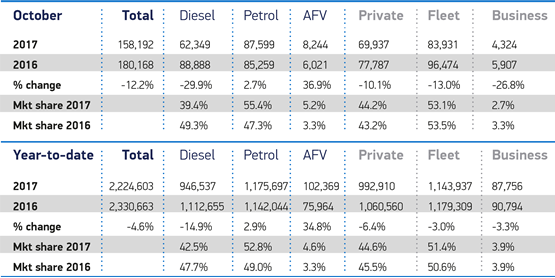 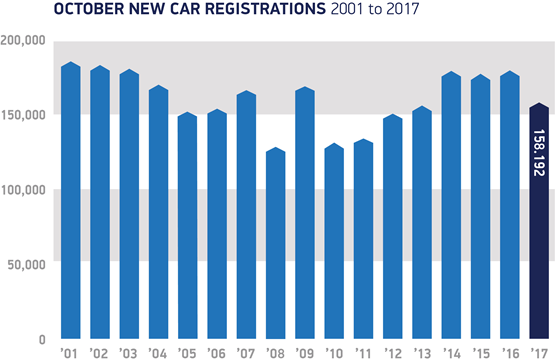