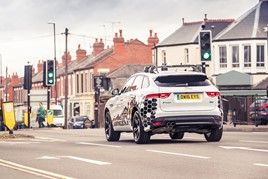 Jaguar Land Rover (JLR) is trialing new vehicle to infrastructure technology that helps drivers plan ahead with vehicle speeds to avoid getting stuck at red lights.

The Green Light Optimal Speed Advisory (GLOSA) system allows cars to “talk” to traffic lights and inform the driver the speed they should drive as they approach junctions or signals.

JLR said widespread adoption of the V2X technology will prevent drivers from racing to beat the lights and improve air quality by reducing harsh acceleration or braking near lights. The goal is for the V2X revolution to create free-flowing cities with fewer delays and less commuter stress.

The connected technology is currently being trialled on a Jaguar F-Pace, as part of a £20 million collaborative research project called UK Autodrive.

GLOSA is being tested alongside other measures to slash the time commuters spend in traffic.