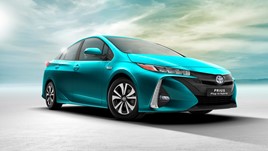 Fleets should switch to hybrid vehicles rather than waiting for an adequate supply of fully-electric vehicles, in order to reduce real-world CO2 emissions.

The findings come from Emissions Analytics, which says that hybrids are 14 times better than battery electric vehicles (BEVs) at reducing real-world CO2.

“One of our biggest challenges is fleet turnover, with vehicles staying on the road typically for up to 12 years,” explains Nick Molden, CEO of Emissions Analytics. “It means that refreshing the entire fleet is a very slow process. Given reservations about current BEVs, we require an alternative that will have a more immediate impact. Due to CO2’s long life in the atmosphere, a small change now is far better than a large change in the future. We need to optimise the use of the industry’s available battery capacity to facilitate a critical early reduction.”

It says a smaller reduction per vehicle now, but across many more hybrid vehicles, would eliminate a far greater volume of CO2 than applying the scarce battery resource to a smaller number of BEVs.  This approach also helps mitigate naturally slow fleet turnover, with the average age of cars on the road being over twelve years.

Emissions Anaylitics believes that the EU’s post-2021 emissions targets could be met without the need for BEVs, if hybrid uptake was strong enough.

Further analysis found that mild hybrids provide the most efficient method of CO2 reduction per unit of battery size, followed by full hybrids.

Plug-in hybrids are the next most effective after that, but only if they are operated entirely on battery, which is hard to enforce in practice.

BEVs show the lowest efficiency in this table, primarily due to requiring disproportionately large batteries to accommodate relatively infrequent, extreme usage cases where the driver will otherwise suffer range anxiety.

The analysis ignores the upstream CO2 in fuel extraction, refining and transportation, as well as in the production and distribution of electricity.

Emissions Analytics concludes that a transition from petrol engines to petrol hybrids can reduce emissions by 34%.  As it will take time to increase the supply of full hybrids, it outlines two routes to short-term CO2 reduction that are viable more quickly.  First, a switch from petrol to diesel in practice reduces CO2 emissions by 11% at the tailpipe.  A second step then to a diesel mild hybrid delivers a further 6% reduction.  The final swap to full hybrid delivers another 16%, making 34% in total.  Alternatively, a direct switch from gasoline to gasoline mild hybrid can deliver 11%, followed by a further 23% in moving to full hybrid.

The average CO2 emissions across all cars sold in Europe reached a four-year high of 120.5g/km in 2018, according to Jato Dynamics.

The automotive industry could be facing a new emissions scandal as Emissions Analytics uncovers discrepancies in petrol car emissions figures.