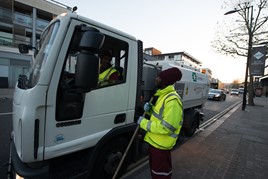 Businesses operating vehicles in London are being targeted by a new campaign to prevent air pollution caused by idling engines.

Idling Action’s #enginesoff campaign asks firms to pledge that their fleet drivers and other employees will not leave their engines on when parked.

Leaving an engine idling is already an offence under the Section 42 of the Road Traffic Act 1988. Drivers can face a fine upwards of £20 for leaving their engine on while in a stationary vehicle; this can rise to £80 in some areas of London.

Idling Action is offering London drivers free training and a providing a toolkit of resources to businesses, whose operations involve vehicle fleets, professional drivers, or employees who travel by car to work.

“Switching off the engine when your vehicle is parked is more important now than ever before.

“As we learn more about the harmful effects of Covid-19 on the lungs, we are making a particular plea to London’s businesses to play their part in ridding the capital of toxic air and saving lives.”

Veolia is among the first to pledge its support for the campaign.

Idling Action officers have already run air pollution anti-idling workshops with 40 schools, and spoken with nearly 8,000 drivers to ask them to switch off their engines at regular idling action events with London’s local authorities.

As well as asking businesses to pledge, the partner local authorities own fleets will be taking part in driver training and taking the #EnginesOff pledge.

Drivers who leave engines idling ‘should be fined’

72% of drivers say they want a crackdown on engine idling, with 44% saying fine drivers if they refuse to switch off, new RAC research suggests.