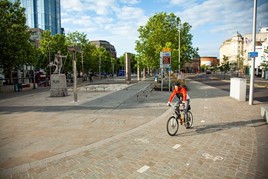 Bristol City Council has agreed its final proposals for a Clean Air Zone (CAZ) and will now submit them to Government.

The city has decided to implement a Class D CAZ, which will require drivers of all older, non-compliant, vehicles to pay a daily fee to enter the zone.

The charging zone covers a small area of central Bristol and is expected to deliver compliance with legal limits for air pollution by 2023.

It is estimated that more than 71% of vehicles using the zone are already compliant.

The Full Business Case details the mitigations and exemptions that the council have proposed to support those most likely to be impacted by the proposals. Individuals earning less than £24,000 a year and no more than £12.45 per hour will be able to apply for a one year’s exemption and there will also be exemptions for hospital visitors.

The Council previously approved plans for a Class C CAZ, which excludes cars, and also considered scrapping the initiative altogether.

Mayor of Bristol Marvin Rees said: “We have a moral and legal responsibility to make our air cleaner and the submission of this Full Business Case is a significant intervention to improve public health.

“We recognise that these proposals will impact on individuals and businesses. We’re now calling on the Government to provide the funding needed to help us support these people.

“We’re grateful to the thousands of individuals and businesses who took part in our Clean Air Zone consultation and we want to continue working together on our journey towards a healthier city.”

CAZ and ULEZ affect almost half of fleets, finds Arval

CAZ and ULEZ affect almost half of fleets, finds Arval