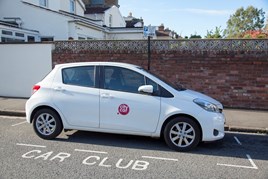 The Royal Borough of Greenwich in London has appointed City Car Club as its car sharing partner.

Recently acquired by Enterprise Rent-A-Car, City Car Club has a track record of building strong and committed community membership wherever it operates.

Initially City Car Club will operate 27 vehicles from parking bays across the borough with 25 cars and two vans. However, there are already plans to further expand its presence across Greenwich in the coming months.

City Car Club was appointed after a competitive tender process and will replace the incumbent supplier as the borough’s sole car sharing provider.

The company’s car sharing model is a cost-effective alternative to car ownership, an environmentally-friendly and hassle-free supplement to public transport.

With 9,000 members already in London and more than 30,000 across the UK, City Car Club is one of the UK’s leading providers of car sharing for both private and business users.

Councillor Danny Thorpe, Royal Borough of Greenwich cabinet member for regeneration and transport, said: “We were one of the first boroughs to offer a car sharing service and we want to continue to encourage as much uptake as possible. Joining a car club is a great way of saving on the costs of car ownership and is more environmentally friendly.

“Car clubs form an important strand of our efforts to encourage people to look at the whole range of transport options open to them – be it walking, cycling, using public transport, or when needing to use a car, considering whether a car club would suit them. There are huge benefits to being in a car club so I urge residents to consider whether it would work for them.”

City Car Club managing director Brian Swallow, said: “Delivering a successful car sharing scheme requires depth of expertise, but also a willingness to listen to the needs of the borough and its residents so that the focus is on service rather than short-term gain.

“We will be investing in a major publicity campaign in June to raise awareness of the potential of car sharing in Royal Greenwich, aiming to build up a local membership and deliver all of the sustainability and cost benefits that car clubs and vehicle rental can bring.

We’re really looking forward to showing the people of the Royal Borough of Greenwich – as well as other club members from around the UK – what we can do for them.”

Fleet Poll
Have you recently received an incorrect tax code for a company car from HMRC?
Vote
View all
54