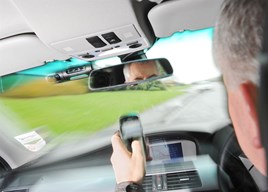 Employers are being urged to take road risk management seriously after one in five drivers admitted to using a hand-held mobile phone while driving; one in 20 to drink driving and 3% said they had driven while under the influence of a drugs.

Perhaps unsurprisingly, almost two thirds of company car drivers also owned up to breaking the speed limit on urban or major roads, in the past 12 months.

Dr Tom Fisher, senior research officer at the road safety charity Brake, said: “A shockingly high proportion of drivers admit to breaking the law by speeding, a contributory factor in one in four fatal crashes in the UK.

“Employers should assess schedules and routes to allow time for delays and ensure drivers are not put at risk.

“Drivers should be clear that safety comes first, and that they should never speed to meet a schedule.”

The widespread use of hand-held phones while behind the wheel however, poses another problem for fleet managers.

More than 1,000 drivers were surveyed for the Lex Autolease Report on Company Motoring 2015 and 20% admitted to using a hand-held mobile phone while driving.

That compares to a Department for Transport (DfT) survey in 2014, which said 1.6% of drivers in England and Scotland were observed using a hand-held mobile.

Fisher warned: “Drivers who perform a secondary task at the wheel are two to three times more likely to crash.

“Employers need to introduce policies to prevent drivers using their phones behind the wheel, and introduce a ban on calling people when they may be driving.”

Just 3% of respondents admitted to being under the influence of prescription drugs which prohibit driving. This follows the introduction of a law banning driving whilst using certain prescription drugs in England and Wales in March, 2015.

The same number (3%) admitted to driving under the influence of recreational drugs, which have also recently seen tough, new laws introduced.

In the first few weeks that South Yorkshire Police started testing drivers for drugs in 2015, they found that 63% of those tested reported positively for cocaine or cannabis.

“Employers of all sizes need to take road risk management seriously,” said Fisher. “Everyone who drives for work in an organisation should be appropriately trained and vehicles fitted with appropriate technology.”

Perhaps in response to the substantial minority of drivers who admit to dangerous driving or being distracted at the wheel, many organisations are introducing driver training.

The survey reveals that 39% of those who use their car for work have had driver training or information provided by their employer.

Training is mandatory in some organisations where there is high risk, such as in petrochemicals or construction, but more than half (57%) of drivers say they think it is a good idea for everyone to have some driver training.

More than a third (34%) say it is a good idea for some drivers to undergo training and 37% of fleet managers say their organisation provides training on accident avoidance and safer driving, with 19% providing training on more economical driving.

More also say they are likely to start providing such driver training in the next two years.

Fisher concluded: “Latest figures show a worrying increase in deaths and serious injuries on UK roads. To reverse this trend, we believe the Government should reintroduce casualty reduction targets as well as introducing a lower urban default speed limit of 20mph, a zero tolerance limit for drink driving, and new measures to protect young drivers.”

Read this week’s Fleet News for more from the Lex Autolease Report on Company Motoring 2015.