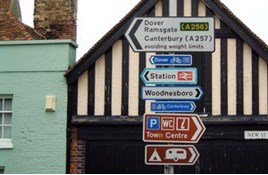 The Department for Transport has set up a taskforce overseen by Sir Alan Duncan MP aimed at tackling the overuse of traffic signs.

It has also launched a consultation process on a range of new measures, including:

“We are restoring common sense to Britain's roads while ensuring drivers have the information they need to get about safely.

"We have already made much progress but Sir Alan Duncan's new taskforce is an important step towards striking the right balance.”

Research carried out by the DfT in 2013 to inform the Traffic Signs Policy Review showed that the number of traffic signs has doubled in the last 20 years.

Sir Alan Duncan MP’s taskforce will aim to make practical suggestions for removing clutter and ask whether some signs can be removed altogether.

It will also look at what can be done to change the culture within local authorities to reduce signing and consider the factors that lead to sign clutter.

The taskforce will begin work soon and present its recommendations to Government by December 2015.

The consultation will close on October 6 and the DfT will respond in due course.