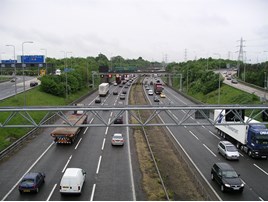 Lane-hogging on Britain’s motorway network annoys motorists the most, with more than half (50.8%) putting it as their number one pet hate, according to a Fleet News poll.

One in three (32.5%) said tailgating was their biggest frustration, while failing to signal (11.5%) and speeding (2.8%) were also highlighted among the most annoying driving traits.

Other driving misdemeanours that made company car and van drivers’ blood boil were the use of hand-held mobile phones and undertaking.

“That’s why we’ve made it easier for the police to tackle problem drivers like middle-lane hoggers by allowing them to issue on-the-spot fines rather than having to take every offender to court.”

On a three-lane dual carriageway, motorists may use the middle lane or the right-hand lane to overtake, but must return to the middle and then the left-hand lane when it is safe.

One poll respondent told Fleet News: “Middle-lane hogging is just laziness and demonstrates that the driver is not paying attention to the most important task at hand – driving.

“We have all seen people joining an empty motorway, only to pull straight into the middle lane. I think it is acceptable to undertake such people because if they were not in the wrong lane, there would be no opportunity to undertake them.”

Another said: “It makes it difficult for those of us that like to use the motorway properly.

“Middle-lane hoggers often sit at 65-75mph so if you are in the inside lane doing 70mph, you then have to go two lanes over and up your speed to around 80-85mph just to get by someone who is driving along in the wrong lane.”

Highways England has joined forces with Cheshire Police to target middle-lane hoggers during a 12-week campaign.

The pilot initiative, which is due to finish in October, aims to substantially reduce the amount of lane hogging on Cheshire’s motorways and could be rolled out across England if it proves to be a success.

Adverts at five motorway services in Cheshire will advise lane-hoggers that they could face a £100 on-the-spot fine and three penalty points, while electronic message signs are being used to encourage drivers to stay safe by keeping left.

One advert shows a car coasting in the middle lane with the warning ‘More likely to encounter an undertaker’.

Alan Shepherd, north-west regional director at Highways England, said: “There’s a common belief that the middle lane is the safest place to be on the motorway but our research shows that simply isn’t true.

“One in seven motorists admit to driving aggressively if they encounter a lane-hogger, which means people who permanently stay in the middle lane are more likely to be involved in an accident.”

The campaign follows the first prosecution for lane-hogging after new legislation was introduced giving the police powers to issue on-the-spot fines.

A van driver was ordered to pay almost £1,000 and received five penalty points after he was spotting travelling at 60mph in the middle lane on the M62, blocking six drivers who had to brake and then overtake.

Inspector Richard Hill, from Cheshire Police’s Roads Policing Unit, said: “Sitting in the middle lane not only causes aggravation for other motorists, it can cause accidents and leave you with a fine if you are caught.”