Fleet managers should understand risk of staff who commute 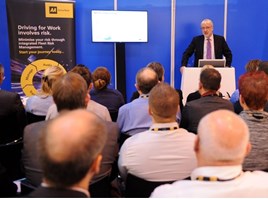 AA Drivetech suggested that fleet managers should consider the risk of all staff who drive as part of their road risk policy, including commuters.

David Richards, head of marketing at AA Drivetech, explained that the findings are part of a white paper published by road risk research company, Road Safety Analysis and commissioned by AA drive tech.

Speaking at Fleet Management Live, Richards said: “You might think as a fleet manager this doesn’t have relevance to you because it’s outside your duty of care.

“But we thought as responsible employers we should be looking at the risk across all of our staff.”

The report identified three separate time blocks when drivers commute: 04:30-7am and 7-9am when drivers are commuting into work, as well as the 4-6:30 period when drivers leave  their places of work.

Richards explained that all periods come with their individual risks. The research found that drivers commuting in the early morning commute (04:30-7am)  are more likely to crash on bends than those travelling into work later in the morning, and more at risk of having an accident on strategic roads, such as major A-roads.

Rural roads also pose an increased risk as well as faster roads, such as duel carriageways and motorways. Drivers commuting during this period on high speed roads are 28% more likely to be involved in an accident on 60mph limit roads than drivers commuting later in the day and %19 more likely in 70mph limits.

During the evening commute, the report claims that drivers are 35% more likely to have a crash on an unclassified road than any other group at 19%.

The evening commute also posed the strongest risk to drivers of being in involved in a crash on a 30mph limit route than the other two groups.

They are also more likely to have a crash while they are stationary and in “stop-start” traffic.