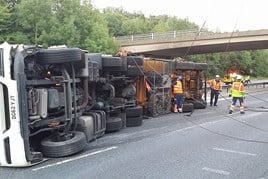 Highways England has revealed some of the strangest items ever spilled on its roads just days after 24 tonnes of lard were dumped on the M11, closing it for 24 hours.

From animal blood to argon, toilet roll to toxic waste, wine to washing up liquid - highways teams have faced many mammoth challenges to clear up after motorway incidents.

The unexpected nature of motorway incidents means it can be hard to plan for what may happen on any given day. Over the past few years, there have been numerous spills, ranging from the strange to the dangerous.

Highways England has compiled a list of the strangest spills on England’s motorways.

Melanie Clarke, director of customer operations at Highways England, explained: “Our roads are among the safest in the world, and safety is our number one priority.

“Our role is to ensure we clear incidents quickly, and keep traffic moving to minimise delays. We work closely with the emergency services, in challenging circumstances, to try to keep drivers moving after an incident.

“We know drivers get frustrated when their journeys are disrupted but we do all we can to clean the road quickly after an incident – and it’s often much more complicated than simply moving the vehicles off the road to reopen it. That’s why it can often take longer for us to safely reopen roads when a potentially dangerous substance is spilled in an incident.

“Our teams expect the unexpected, but of course, when you’re dealing with ten tonnes of salmon, dangerous toxic chemicals, or emulsion paint, the clean-up operation is somewhat complicated.”

Despite having to deal with some unusual shed loads, everyday items actually pose the biggest challenges for Highways England’s clean-up teams.

Diesel, which is often spilled after an HGV incident, creates a chemical reaction with asphalt, which causes the road surface to rot.

Teams have to use highly-specialised hydroblasters to completely clean the road. If any diesel is left over, it could create potholes: so it’s important that any cleaning is very thorough. If the road is badly damaged, it may have to be totally relaid so the surface maintains its integrity.

Milk poses a similar problem: it rots the road, can stick to the surface and becomes very slippery in wet weather. All traces have to be cleaned off the road before it is safe to reopen.

It also poses problems for wildlife: if it gets into nearby watercourses, from drainage at the roadside, it can deprive the water of oxygen – essentially asphyxiating fish and other animals – so the Environment Agency has to get involved to ensure the spilled substance is properly removed and won’t pose a threat to people or animals. This can cause further delays to traffic while investigations are underway.

Here are ten of the strangest spillages:

On March 20, 2009, at the A3 Stoke Interchange near Guildford, a HGV crashed and shed a full load of raw sewage onto the road.

Because of the hazardous nature of the spilled substance, the Environment Agency had to be called in. Specialist teams were needed to deal with the incident, and it took five hours to get the road cleaned and safe to reopen.

Thousands of tins of beans spread across the M11 southbound after an incident on 12 April 2012.

Twitter user @julietkinsman was going home in a taxi when she came across the incident scene. She managed to capture a snap of the debris on her phone as traffic was stopped while the tins were picked up.

The driver was unhurt, but the tins of beans had been damaged and started to spill onto the road. A mini-digger was called in to scoop up all the tins, and in all, it took about 3 hours to clean up all the beans, clear the road and reopen it safely.

A lot of yeast extract ended up across the M1 in South Yorkshire after an incident on 29 November 2011.

Specialist clean-up teams were needed to help clear the sticky black stuff off the motorway – with sandbagging teams used to stop it spreading further.

The driver of the vehicle was not seriously injured, but had to be freed after becoming trapped in the cab. Damage to the central reservation barrier also had to be fixed before we reopened the road.

It took 12 hours to clean up and fix the damage.

When a lorry shed its load of lager cans following an incident at M6 junction 2 in Coventry in 2011, highways teams had to pick up every beverage by hand before reopening the motorway.

The central reserve barrier had been damaged in the crash, so that had to be fixed while teams removed the tins.

In all, it took four hours for all the cans to be removed and the road to reopen.

An HGV overturned on the M62 eastbound on 15 March 2013, spilling ten tonnes of salmon onto the carriageway in the process.

Countless salmon had to be picked up by hand from the road. Teams also righted the tipped HGV and repaired damage to the central reserve.

The incident occurred at 2.45am, so teams had to mobilise in the middle of the night to deal with the fish. The road eventually reopened at 6pm after a complicated clean-up operation.

There are dangers when a tanker spills chemicals. The Environment Agency was called in to help deal with this incident, along with Essex Fire and Rescue, on the M11 in Essex on 3 July 2014.

This was a particularly difficult operation, as the liquid started to solidify on the road surface. In all, three specialist vehicles worked to clean up the carriageway. The incident happened just after 5pm, teams worked through the night to clean up – they were still dealing with the spillage at 4.30am, and had to clear 325 metres of carriageway in total. The road eventually reopened at 10.20am on 4 July.

Animal blood, A50, Stoke on Trent

A tanker started to leak animal blood after an incident on the eastbound carriageway of the A50 on 10 September 2011. It took almost four hours for specialist clean-up teams from West Midlands Fire and Rescue and highways contractors to deal with the clean-up.

This was a particularly difficult incident. The driver suffered serious injuries after a chemical tanker carrying refrigerated liquid oxygen overturned on the A303 near Yeovil on 7 December 2014. He had to be freed with hydraulic equipment by fire and rescue crews.

A 200m cordon was set up around the scene after the HGV’s fuel tank ruptured. In all, it took just over nine hours to clean up the chemicals and reopen the road.

Cement poses problems after a motorway spill: in this instance, powdered cement spread across the carriageway, and mixed with diesel and oil from one of the HGVs involved in the incident.

Specialist teams were called out to help clear the road before the cement could get wet and start to set. The incident happened at about 2:46pm on 24 July 2014 – which was one of the hottest days of the year. Highways England traffic officers worked with North West Motorway Police to check on drivers stuck in the resulting queues, and hand out water.

It eventually took 18 hours to clear the road and reopen it safely for drivers.