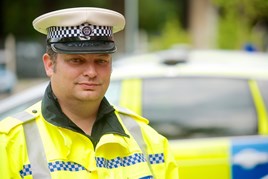 MPs have been warned that a lack of resource is threatening the police’s ability to catch motorists breaking the law.

It was revealed earlier this year that the number of police dedicated to enforcing traffic offences in England and Wales had fallen by 23% in the past five years – equivalent to 1,279 fewer officers.

Devon and Cornwall Police suffered the largest cut (76%), taking its traffic officers from 239 to just 57.

Essex’s traffic police numbers fell by 71%, Nottinghamshire’s by 68%, Wiltshire’s by 47% and both the Avon and Somerset and Dorset forces traffic function fell by 39% each.

Police are warning that the falling number of officers at their disposal could affect their ability to catch wrongdoers.

Government figures suggest that there has already been a 63% fall in reported traffic offences over the past decade. Supt Paul Keasey (pictured), chair of the national roads policing intelligence forum, believes that’s partly down to favouring education over enforcement.

However, he admitted: “It would be foolish not to say there is a correlation between the two .”

Keasey, who is also head of West Midlands Police road policing unit, told the Transport Select Committee that it was not unusual for officers to be “double” or “triple-hatting” in relation to their responsibilities.

A traffic cop could also be a firearms officer, for example, and, if there was an incident which required an armed response, they wouldn’t be available for road policing duties, he said.

Keasey told MPs: “We’re probably at that tipping point, where the volume of resources will become an issue.

“If you haven’t got the officers to do the work then the reality is it won’t be done.”

He also acknowledged that, with fewer officers on the road, motorists would recognise the opportunity to break the law without the risk of being caught.

However, he explained: “I think we’re much smarter now in our approach.

“We use technology better and we have the ability to predict where offences can occur so, when I allocate resources, the probability of making a difference is a lot higher.”

One way technology has been employed to help road traffic policing is the use of speed cameras.

However, their recent deployment has not been without controversy.

Humberside Police was recently criticised for hiding speed cameras in agricultural equipment, including a tractor parked by the side of the road – an approach that appeared to be at odds with Department for Transport guidelines that say speed cameras should be visible.

The National Police Chiefs Council said: “While speed enforcement will usually be conducted overtly to add to the deterrent effect, sometimes less overt tactics will be required to address specific problem which are causing casualties.”

Grey cameras have also come in for criticism, but after a Government review Highways England now says they will be yellow within a year.

Jim O’Sullivan, Highways England chief executive, said: “While we understand speed cameras are not popular, they play a valuable role in enhancing safety, smoothing traffic flow and reducing congestion for millions of motorists who use our roads.

“We use cameras for safety and traffic management only when other more popular solutions like engineering are not adequate to tackle particular problems on our network.”

Transport secretary Patrick McLoughlin added: “I’ve always been clear that cameras should be visible and get used for safety rather than revenue raising.”

However, that point may have been lost on Bedfordshire’s police and crime commissioner Olly Martins, who has proposed a new ‘zero tolerance’ policy on speeding on the M1, saying it was needed to generate revenue for the force.

“Strict enforcement of the speed limit could raise as  much as £1 million, so it is something I have to take seriously,” he said.

However, McLoughlin has vowed to block the M1 speed camera move, calling it “yet another example of a Labour politician punishing drivers”.