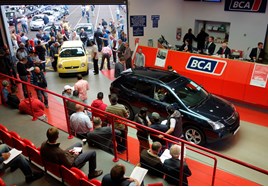 Lex Autolease is poised to outsource a major part of its remarketing operation to BCA Marketplace at the start of next year, in a deal believed to be worth around 80,000 vehicles.

The agreement is expected to include BCA running Lex Autolease’s 10-acre multi-million pound vehicle processing centre and used car supermarket in Coventry, which opened in June 2014.

Fleet News understands Lloyds Bank, the parent company of the UK’s largest leasing company, wanted to dispose of its remarketing operations in order to focus on core activities and is looking to complete the deal before the end of January.

If the deal goes through it will be a blow to rival auction house Manheim, potentially taking away 15,000 vehicles a year from the business.

According to Fleet News sources, the deal is not solus and Lex Autolease will continue working with rival auction houses in a reduced capacity.

Lex Autolease declined to comment on the story, while a spokesman for BCA said: “BCA does not comment on market speculation.”

However, a source said: “The deal between Lex and BCA is widely known about within the remarketing industry.

“The other auction houses Lex uses to dispose of vehicles have been informed they will be losing business.”

The leasing company uses its Coventry centre to remarket around 45,000 vehicles a year and the site also has space for 500 used cars to retail to the general public through its Car Select brand. It employs 150 people.

The remarketing supersite replaced the two centres Lex had near its headquarters in Birmingham.

BCA was recently told by the Competition and Markets Authority (CMA) it needed to take action due to its £42 million merger with Scottish Motor Auctions (SMA) this summer potentially leading to “higher prices or a reduction in choice or quality of service” in the Newcastle area.

BCA will likely sell off the former SMA Newcastle site to avoid a full investigation by the CMA.

At the time of the launch of Lex Autolease’s Coventry remarketing business, managing director Tim Porter said the site was a key part of the company’s growth strategy and represented a “significant investment for the business”.

Porter stated that having a remarketing division was one of his five-pillars for growth and helped the business create an end-to-end process from leasing cars to processing the large volume of vehicles which are returned at the end of their agreements.

Reducing Lex Autolease’s exposure to the remarketing side of the business leaves the company to focus on targeting its leasing division on SMEs, business critical fleets and ‘mega’ corporate fleets, while the remaining pillars are improving internal processes, efficiency measures and boosting its digital capabilities.

Publicly-listed BCA is owned by Haversham Holdings, a consortium of investors set up last year with the aim of buying “substantial companies and businesses in the UK and European automotive, support services, leasing, engineering or manufacturing sectors”.

Fleet News understands Haversham is still on the acquisition trail, to turn BCA into a one-stop shop offering, to include pre-delivery inspection (PDI) and end-of-life services.

Industry speculation has suggested that the company is lining up a deal to buy Paragon Automotive.

However, this has been firmly rebutted by bosses at the privately-owned business.

Paragon is the UK’s largest supplier of end-of-life and PDI services for vehicle manufacturers, handling more than 750,000 vehicles last year, of which more than 460,000  are new.