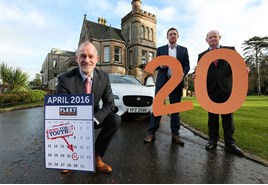 Fleet Financial will celebrate its 20-year anniversary with a year-long series of events and initiatives.

The contract hire and vehicle management provider, which launched in February 1996, has offices in Newtownabbey and Manchester and is part of Northern Ireland car retailer Charles Hurst Group.

Its client base of 1,000 companies ranges from sole traders, SMEs and some of Northern Ireland’s leading companies. It currently manages a fleet in excess of 4,000 vehicles.

Fleet Financial will be holding gala ball at the Culloden Hotel on Friday, April 22 to raise funds for Hope for Youth NI, a local charity now in its 20th year, which provide support for young people right across Northern Ireland.

Philip Miley, sales and marketing director at Fleet Financial, said: “As we reflect on the last two decades, we’re excited to be marking our 20th anniversary in 2016 and we look forward with great pride to our spectacular fundraising Gala Ball in April, which gives us a major opportunity to thank everyone for their hard work, dedication and for giving their support to us.”