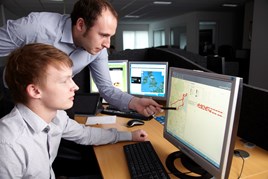 Route Monkey is gearing up for a major smart cities project as part of an international consortium.

The cities of Bristol, San Sebastián in the Basque region of Spain and Florence in Italy have been awarded €25 million to tackle urban challenges such as traffic congestion, poor air quality and energy consumption.

Route Monkey is part of the Bristol consortium, which is known as Replicate (Renaissance of Places with Innovative Citizenship And Technologies).

Replicate will include an electric vehicle car-sharing initiative, as well as integrated transport networks for commuters and business users.

Colin Ferguson, CEO of Route Monkey, said: “Replicate is a great opportunity for us to demonstrate the effectiveness of our algorithms in smart city applications.

"Urban mobility is facing many challenges and we believe our technology can play a key part in delivering the solutions.”

Route Monkey’s algorithms are capable of making millions of calculations in a relatively short space of time, vastly improving on manual transport and travel planning.

Through integration with other technologies, Route Monkey can aggregate existing transport networks into a comprehensive, point-to-point ‘mobility on demand’ system.

The company is one of 35 partners in Replicate, including Co-Wheels Car Club, which will run the EV car-sharing scheme.

The €25m award comes from the Smart Cities and Communities element of the EU’s Horizon 2020 innovation programme.

The success from these lighthouse cities will be disseminated as best practice to ‘follower cities’ across the world.

The project will primarily focus on East Bristol and aims to demonstrate how technology can create efficient, integrated and interactive urban environments that empower citizens.