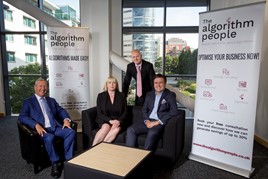 The Algorithm People has secured £500,000 from the North East Venture Fund (NEVF) to bring to market a new transport planning platform.

My Transport Planner aims to enable organisations of all sizes to increase vehicle utilisation, cut costs and reduce emissions from road transport.

Using the Software as a Service (SaaS) model, My Transport Planner is an on-demand, pay-as-you-go solution that its makers claim will deliver a “near-instantaneous return on investment”.

The Algorithm People says it will also include a combination of features for “getting the best out of electric vehicles” (EVs) as part of a wider fleet.

Colin Ferguson, CEO of The Algorithm People, said: “With growing fears over air pollution and climate change, fleet managers are under pressure to reduce both emissions and fuel use. EVs are an ideal way to achieve this; but their use requires careful planning.

“My Transport Planner shows organisations how to achieve maximum return on investment for EVs as well as reduce costs throughout the wider fleet.”

The Algorithm People was launched in April 2019 by Colin and Sarah Ferguson. The couple used algorithms to achieve route optimisation with their last company, Route Monkey, which they successfully grew and sold in 2015.

The investment from the NEVF, supported by the European Regional Development Fund and managed by Mercia, will enable the Algorithm People to further develop the platform and build a management, sales and marketing team, creating 13 new jobs initially.

Colin Ferguson said he was looking forward to working with Mercia and the NEVF to help “further develop the product and execute our growth plans”.

The NEVF can invest up to £1 million in firms based in Tyne and Wear, Northumberland, or Durham, particularly those which are engaged in innovation or developing disruptive business models. Funding is available to all companies with high growth potential and also pre-start enterprises.

Ian Wilson, fund principal with Mercia, said: “The Algorithm People is led by a highly experienced team which has spotted a gap in the market.

“My Transport Planner will help operators to make the transition to electric vehicles and open the market up to smaller businesses who do not currently use this type of software. This investment will allow the team to put their plans into action and drive sales.”

Telematics provider Trakm8 has conditionally agreed to acquire routing software provider Route Monkey for a consideration of up to £9.1 million.