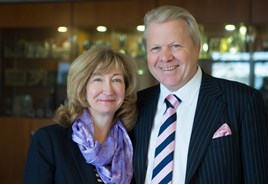 TTC Group has been named as one of the top 1,000 dynamic companies to inspire Britain.

The fleet training organisation, which educates more than 330,000 people each year, was picked out by the Stock Exchange for being a well-run business in the education sector with a potential for growth.

It is one of 240 companies to make the 1,000 Companies to Inspire Britain list for the second year running.

Chairman Jenny Wynn (pictured), who founded the company more than 20 years ago with husband Graham (pictured), said they were "passionate" about the need to educate all road users to reduce casualties.

Over the past few years they have expanded driver education into educating the corporate sector, fleet driver safety, and cycle training for all ages.

Its new teaching resource - Key 2 Potential - is being recognised by teachers and educationalists for its success in changing behaviour and improving soft skills among hard to reach pupils and young people to get them into the world of work.

With a head office in Telford, Shropshire, opened by the Princess Royal, it has more than 300 of the best qualified trainers who deliver on the road and classroom instruction to road users nationwide.

It is provider of driver behavioural change courses for the National Driver Offender Retraining Scheme (NDORS), an educational alternative to prosecution for some road traffic offences, and it runs courses on behalf of police and councils in 12 UK regions from Scotland in the north, Wales in the west, across north England and the Midlands to Avon and Somerset, Kent and Devon and Cornwall in the south.