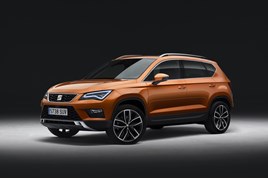 It is arguably the brand that is least well defined under the Volkswagen Group portfolio, but Seat has a plan to address its image issues with a new marketing strategy called ‘created in Barcelona’.

According to managing director Richard Harrison, the campaign is intended to better communicate what Seat stands for by associating it with a city in its home market that people instantly identify with.

“It’s vibrant, interesting design, young spirited, dynamic – and that’s what we are about,” he said. “It is easier for people to understand; Barcelona conjures up the right images.”

Seat is putting greater emphasis into building its fleet business this year after taking the decision to strengthen its fleet teams just over 12 months ago. It also withdrew cars from short-cycle rental during 2015, cutting volumes by 10% to around 4,850 units.

The company also reduced Motability by one-third as it sought to better balance its fleet business.

“We are not volume for volumes sake; we will not push in high cost areas where it is not good for us long-term,” Harrison said.

While unwilling to specify registrations targets for 2016, Harrison did say he was “comfortable” with the current level of rental: “The balance is right.”

The work undertaken during 2015 is starting to take effect, with Seat recording one of its best ever months for fleet orders in January. It also suggests that shadow cast by the NOx emissions scandal last year is starting to lift.

In response, Harrison said: “Our priority is to do our best by our customers. We have a plan and our dealers are well set to make it as smooth as possible from customers’ point of view.”

Meanwhile, the new Ateca SUV which is due to go on sale in September (orders open in April), will open more doors in a rapidly growing market segment.

“We are confident with this car; it has had a positive reaction,” Harrison said. “My objective is to have one more person wanting the car than I can supply.

“I’m interested in real, sustainable business . I don’t want to hit RVs; if that means we lose market share to do it, then so be it. It’s important to take the long-term view, especially when we look at the product that is coming.”

Seat has already confirmed a smaller SUV among the models due for launch over the next 18-24 months. It intends to bring a new model to market every six to eight months as part of a E3.3bn investment.

In the UK, it currently has a model range that covers just 54% of the market by product type. “By the time we complete our product plan that will increase substantially to more than 70%,” Harrison added.