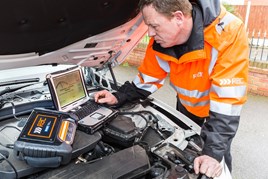 The RAC has begun equipping its 1,500 patrols with battery testers which will enable them to carry out full roadside diagnostic checks on the health of a vehicle’s battery, starting and charging systems.

Breakdowns involving batteries are the number one cause of RAC call-outs with patrols attending more than 445,000 members for this reason in 2015.

The nature of these breakdowns is becoming increasing complex due to advances in battery technology.

Batteries have developed rapidly in recent years with the advent of enhanced flooded batteries (EFB) and absorbent glass matt (AGM) technology, both of which are used in ‘stop-start’ vehicles.

And, with up to 70% of new vehicles produced in Europe featuring ‘stop-start’ technology, there is a growing requirement to diagnose issues with these batteries in breakdown situations.

In addition to repeatedly starting the vehicle every time it comes to a stop on a journey, today's batteries must stand up to more demand on their resources than ever before.

The RAC roadside battery diagnostic tester can also carry out ‘conductance profiling’ to determine a battery's endurance by assessing its reserve capacity and its ability to support a vehicle's starting and auxiliary power requirements.

If the battery is unable to support these requirements the tester highlights this by showing a low ‘reserve capacity’ warning.

Phil Ryan, technical director at the RAC, said: “One particular benefit of the RAC Midtronics battery diagnostic tester is a significant improvement in the testing accuracy of partially discharged batteries, allowing our patrols to give members a definitive opinion on their batteries’ health or that of the vehicle’s starting and charging system.

“The unit carries out a five-minute charge acceptance test which displays both the battery's cranking state of health – the ability to start the vehicle – and its reserve capacity. This gives patrols a final decision on whether a battery is fit for purpose or needs replacing.

“Sometimes the battery can be the victim and not the cause as there can be occasions where an inferior testing device shows that a battery needs replacing when in fact it is actually a symptom of a wider problem in the vehicle’s starting and charging system.

"This would often lead to a new battery being damaged or flattened in a short space of time which can be very frustrating for all concerned.

"Fortunately, this is one challenge that RAC patrols will no longer have to face.”