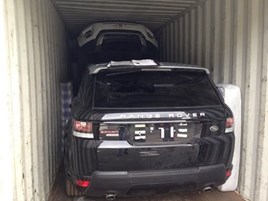 "These Range Rovers would have been shipped overseas to awaiting clients and sold for a tidy profit.

"The Range Rover Sport was in fact the most stolen and recovered vehicle in 2015, demonstrating how highly desirable these cars are for thieves.

"We are certainly seeing a growing demand for these types of vehicles in places like Africa and the Middle East.”

When a vehicle fitted with a Tracker unit passes any Tracker SVR equipped vehicle that has been reported stolen, it automatically sends a signal to Tracker providing the location of the stolen asset.