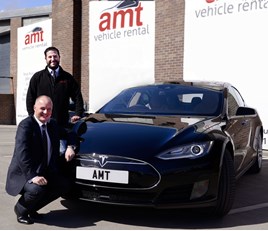 Leeds-headquartered rentals group AMT has made a £200,000 investment in its fleet, with the addition of further models of all-electric cars, including the Tesla Model S.

The vehicles will be available at AMT’s Leeds, Manchester Stockport and London locations, and together with a number of Nissan Leaf models, mark AMT’s commitment to growing its fleet to include a wider choice of energy-efficient cars.

The five-seat Model S has a large 85kWh battery which gives a range of up to 338 miles from a single, full charge. The all-wheel drive car also features automatic steering and parking systems.

The British-built Nissan Leaf, which has once again topped the list of the UK’s most popular electric cars, is a small hatchback with a 30kWh battery, giving a range of up to 155 miles from a single charge.

Andy Crinson, general manager of AMT Vehicle Rental, explained: “With zero emissions and low running costs, electric vehicles are becoming increasingly popular and as an independent company, we have the flexibility to respond quickly to our customers’ demands.

“We are one of the first rental companies in the UK to offer premium electric cars and hybrids with nearly 10% of our fleet now made up of these energy-efficient vehicles, giving customers a wide range of options from an economical city centre run-about like the Leaf to the stylish high performance Tesla sports car.”

Powered solely by an electric motor, the cars not only remove the cost of fuel, but also give further cost savings as they have far fewer moving parts, meaning that oil changes are no longer necessary and servicing is much less frequent.

They are road tax and congestion charge exempt and eligible for various government incentives, including being exempt from the Benefit-in-Kind rate for company car drivers.

Electric vehicle charging points at motorway service stations and even at supermarkets are becoming increasingly common and AMT has its own charging points.

Established in 1995, AMT Group is a privately owned business employing 180 staff around the UK.