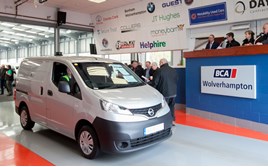 BCA has rebranded its second SMA centre with the opening of BCA Wolverhampton on the outskirts of Bilston.

The centre has two auction lanes and undercover viewing for 300 vehicles and is being managed by Jim Wilson, who has been with BCA for nearly 30 years and formerly managed BCA’s Walsall and Birmingham centres.

BCA operations director Stuart Pearson said: “BCA Wolverhampton is a superb modern remarketing facility that will play a key role in the expanded BCA network.  The opening sales have been very well attended, with plenty of activity from BCA Live Online buyers, generating high conversion rates and strong price performance. Congratulations to manager Jim Wilson and the team at BCA Wolverhampton for ensuring these opening sale events under the BCA brand have been so successful.”