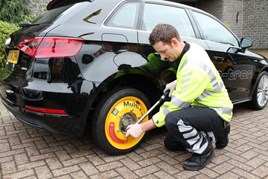 The AA’s new ‘Multi-fit’ wheel is saving more than an hour at the roadside for vehicles without a spare wheel.

It launched its Multi-fit wheel in response to the 'pothole puncture epidemic' and the fact that up to a third of newer cars don’t have a spare.

The Multi-fit wheel comprises a slim-fit wheel and tyre with a range of interchangeable hubs and stud sets that will fit up to 90% of cars that don’t carry a spare, as well as caravans and some trailers.

All AA roadside service patrols carry the bright yellow wheel, which has a speed limit of 50mph. It can be fitted quickly at the roadside by the Patrol.

Since its introduction it has impressed both AA members and the Patrols fitting them.

The AA’s Patrol of the Year Max Holdstock reports that often more than an hour can be saved through use of the ‘fit and follow’ wheel.

He said: “I’m delighted with it. If I’m called out to a member who’s suffered a flat and there’s no spare, it’s straightforward to fit the Multi-fit wheel. A range of four- and five-stud hubs and spacers mean the Multi-fit wheel can fit most cars.

“It’s also useful in situations where I need quickly to get a family and their car to a place of safety even if there is a spare, but it’s beneath a boot full of luggage or in a seized-up under-chassis carrier.

“In the past, a flat meant the patrol removing the offending wheel and leaving the car on a jack, taking the member to a depot with the wheel to have the tyre replaced or repaired, then returning to the vehicle. And possibly recovering the vehicle to a safe place before all that happened. That’s a big time-saver.”

Donald MacSporran, the AA’s technical director, said the new solution has been developed specially for the AA to allow the widest possible range of cars to be handled.

“It’s a clever design and has been extensively trialled and it meets all appropriate European standards," he said.

“At a time when around 30% of newer cars aren’t equipped with a spare, the system has proven a blessing in situations where blow-outs caused by a pothole mean neither run-flat tyres or tyre sealant kits, often fitted instead of a spare, can be used.

“Our Patrols are reporting more and more pothole-related tyre failures, thanks to the poor state of repair of Britain’s roads. They often affect two tyres – so the Multi-fit can be invaluable on such occasion when the car does have a spare.”

A recent AA-Populus study among more than 25,000 drivers revealed that over the past 24 months, 39% had suffered damage at the very least to their tyres by hitting a pothole.

“Over the past 12 months we have attended nearly 500,000 calls for assistance due to tyre problems – making it the second most likely reason (after battery issues) for a member to call the AA,” said MacSporran. “And the number of tyre call-outs is rising.”

A separate AA-Populus study found that nearly a fifth of respondents (17%) said they did not have a spare or serviceable spare wheel in their car while up to 5% had no idea whether there was a spare in the boot.

MacSporran added: “Whether you have a spare or not, changing a wheel can be a dirty and hazardous task and our advice is always to call for assistance from the AA, especially if you’re on a motorway or in a dangerous location.”