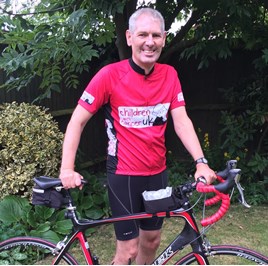 Fleet Hire director Chris Joyce is hoping to raise a substantial sum for a children’s cancer charity after completing the Prudential RideLondon 100-mile cycle race in a time of six hours 56 minutes.

The event, which largely followed the route used by Olympic Road Race in 2012 including the challenging climbs of Leith and Box Hills in Surrey, saw more than 27,000 amateur cyclists take part.

Joyce, chief operating officer at the Solihull-based contract hire, fleet management and salary sacrifice specialist, said he had been pleased by his time as his training had been limited by the weather earlier in the year.

“I was confident that I would at least make it around the 100-mile circuit," he said. "However, I could have been about an hour quicker had we not been delayed by one of the major accidents that took place.”

The event, was also marred by the tragic death of 48-year-old Robin Chard, from Bicester, who suffered a cardiac arrest some 25 miles into this year’s race.

“It was very sad that we unfortunately saw a fatality this year, especially as he was raising money for the fight against cancer and had been a cancer sufferer himself," said Joyce.

“My chosen charity was again Children with Cancer UK. Anyone who has been touched by cancer, either themselves or a close friend or family member, will know just how devastating it can be. When it affects children, it is even more heartbreaking.

“Children with Cancer UK is the leading national children's charity dedicated to the fight against childhood cancer. It isn't funded by the Government and depends on fundraising activities."