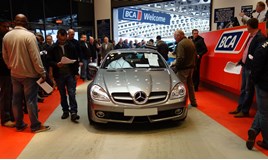 Following a dip in June, used car values bounced back in July, according to BCA's latest Pulse report.

Both fleet/lease and dealer part-exchange values remained at near record levels, while nearly-new values increased.  Year-on-year, the headline figure was up by £635, equivalent to an 8.2% increase in average values.

However, model mix had a role to play as higher value ex-fleet stock increased market share over the month.

“It is noticeable that buyers are being more selective about condition, preparation and presentation.  To maintain desirability and sales performance, vendors can use Smart repairs for those cars that have suffered low level cosmetic damage in the shape of car park dents, stone chips and damage to alloy wheels.”

Values in the fleet and lease sector were effectively static in July, down by just £4 at £9,665 compared to £9,669 the previous month. Retained value against original manufacturers retail price fell to 41.1% in July from 41.93% in June.  Year on year values were static, with age falling by one month and mileage down by 3,000.

BCA is exhibiting at Fleet Management Live, held on October 19-20 at NEC Birmingham. It’s the UK’s biggest fleet show with more than 90 suppliers offering everything you need to run a fleet efficiently. To book your free ticket, visit www.fleetmanagementlive.co.uk.