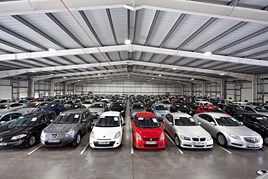 Fleets "hanging onto" cars and vans in an attempt to achieve unrealistic and inflated valuations are causing distortions in the used car and van markets, says Glass's.

Reluctance to sell below these guide prices, and continually resubmitting vehicles for sale at the same or other auctions, creates a range of problems, said Rupert Pontin, director of valuations.

He explained: "Lately, we are going through a phase where we see the same cars and vans presented at auction time and again - and our feedback says that failure to reach book values is the reason.

"With some of the industry price guides consistently overvaluing the market in recent months, it appears to be becoming an increasing problem. Large numbers of vehicles are remaining unsold.

"Firstly, this means businesses are holding onto vehicles much longer than they should, so are taking longer to convert valuable assets into cash. Also, while they remain on the books, the value of these cars and vans nearly always tend to continue falling, leading to a double loss."

Pontin added that the trend also made it difficult for market experts such as Glass's to work out exactly what was happening to the value of certain models.

"A particular car or van may look like it is doing quite well but then it becomes apparent that this was due to fleets holding onto stock in an attempt to reach unrealistic guide prices. Eventually, these cars have to be ‘dumped' onto the market and you see a sudden fall in values as oversupply occurs.

"I'm pleased to say that, in the vast majority of cases, we have identified where this is happening and adjusted our own valuations accordingly, but not everyone in the market can reflect accurate values as swiftly as we can."

However, Simon Henstock, chief operating officer UK remarketing at BCA and vice chairman of NAMA, said feedback on performance has been consistent in recent weeks.

"Prices have improved as inventory has dropped and conversion rates have risen with first time sales – which are critical to churn – also improving," he said. “Reports from managers across BCA’s 23 strong network also bear this out, with both car and LCV sales performing strongly, despite being at the height of the summer holiday season. With this in mind, we are simply not seeing the large numbers of unsold vehicles that have been talked about or rising numbers of over-valued re-entries.”

He continued: “Whatever the wider economic concerns may be, the remarketing sector works closely with both vendors and buyers to ensure vehicles are sensibly priced to meet market expectations in the here and now.

"Our Pulse report for July saw a steady marketplace with the average values at record levels. August has improved on that performance. It has been a strong month with good levels of demand and, with the September plate change nearly upon us, we can expect the markets to be very busy indeed over the coming weeks."

Henstock concluded: “We agree totally that appraising and valuing vehicles accurately is critical to success and consistently put that message into the marketplace. However, current performance suggests that vendors are in tune with market expectations as prices have firmed and churn has improved. In fact, the conversion rate at BCA nationally rose to 85% earlier this week – not a sign of a marketplace that is distressed.”