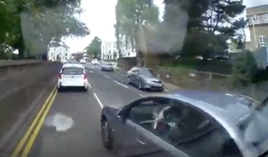 A dashcam has potentially spared a fleet van driver from a violent clash with a road rage motorist.

Footage from a SmartWitness device captured the van driver overtakes the grey Vauxhall Vectra and cutting him up as they drive up a hill at 30mph close to Northampton town centre.

The manoeuvre enrages the Vectra driver who accelerates and drives across the front of the van, causing a small collision.

The road rage driver, wearing a baseball cap, then dashes from his vehicle and goes to attack the van driver, banging on the door of his van so hard the whole vehicles shakes in the video.

A female friend travelling with him in the Vectra then gets out and warns him that the incident is being captured on a dashcam clearly visible near the rearview mirror at the front of the van.

The road rage driver calms down and a violent bust-up is averted.

The incident was captured on the dashcam camera in May and it has been released by SmartWitness, after new figures were released showing a sharp rise in road rage incidents.

Some police forces such as Devon & Cornwall have seen the number of incidents double in the last two years.

Surveys show Britain has the highest incidence of road rage in Europe, which SmartWitness believes because is because UK roads are the most congested.

More than half of drivers (56%) said they had experienced road rage - with tailgating the most likely cause.

"It is amazing what a calming effect a running camera can have on a road rage driver intent on revenge.

"In this incident, the Vectra driver is alerted to the camera by a female passenger and he calms down after he had previously tried to break into the van's cab.

"Clearly the van should not have overtaken the Vectra and cut him up on such a busy town centre road.

"But that still does not excuse the violent reaction from the Vectra driver.

"Thankfully nothing more came of this incident but it does show the value of having a dashcam."