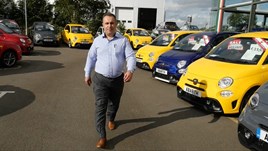 Cash-for-crash fraudsters are targeting car dealership fleets because they are seen as a 'soft touch' for bogus claims, says Research Garage.

The Midlands Fiat, Abarth, Alfa Romeo and Peugeot dealer was being hit with 40 bogus claims a year for its branded repair vans, courtesy cars and test vehicles.

Without any evidence to the contrary, Research Garage’s insurers would always pay out without any dispute.

However, it says it has now eliminated bogus claims by fitting Smartwitness in-cab cameras.

Mick Norcia, managing director of Research Garage, said: “We would have around 40 bogus claims a year, which ranged from faked rear-end shunts to pedestrians claiming they’d been hit by courtesy cars.

"In almost all cases previously we would have to claim on our insurance as we were not able to defend against the allegations."

However, the company has now fitted cameras in its fleet vehicles.

Norcia added:"We still have had just the same number of claims against us this year, but every single time we have had evidence to prove we were not at fault.

“In the case of cash-for-crash we have been able to show very clearly that the other driver was to blame.

“Bogus claims gangs are starting to get to know that we aren’t a soft touch any more. Recently one car overtook one of our vans and then immediately did an emergency stop right in front of him.

"The driver got out to exchange insurance details and our driver pointed out that he had got a camera and that all of the incident had been caught on video.The other driver left immediately and no claim was filed.”