Can dashcams save money? 6 of the most shocking accidents

Fleet News recently reported that ‘dashcams are great for settling disputes’ but do they save money?

Fleet managers can extract dashcam footage of near misses, collisions and road rage to support claims and evaluate driver behaviour. 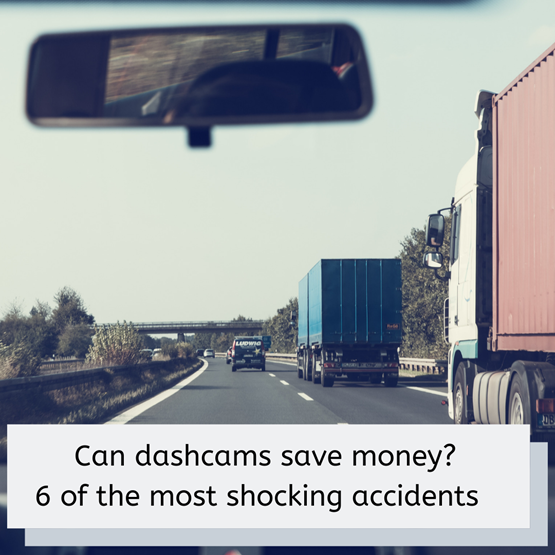 Unfortunately, in most cases, the investment of in-vehicle cameras is through a ‘grudge purchase’ following a claim the fleet couldn’t defend, according to Matt de Prez.

They say that a stitch in time saves nine, and this was certainly true for these fleet drivers. Here are six examples of fleets using video technology to avoid hefty bills (ordered by shock factor):

1. Angry cyclist ‘gets even’ with SUV fleet driver

The footage shows a hot-headed cyclist lift his bike and scrape the pedals across the hood of a £56,000 Mercedes Viano SUV.

The damage came at a cost of £1,500 but the company were able to prove their innocence and claim back the cost of repairs.

2. Hit and run mobile phone user caught in the act

The offending driver was so “wrapped up in his phone call” that he was unaware he had a collision, until presented with the damning footage.

The lorry needed substantial repairs, which were covered by the van driver’s insurance.

3. Fleet safety advice from a ‘doored’ cyclist to dangers of tailgaiting

Sometimes dashcam footage can serve as a public service announcement, warning fleets away from avoidable accidents and save money on future claims.

In this case drivers are urged to check for cyclists before opening their door.

This cyclist escaped with minor injuries and the police were not involved, but the Jetta driver who caught the incident on his camera was also protected from any potential fraudulent claims.

VisionTrack managing director Simon Marsh said: "This footage shows why it is vital that all vehicles are fitted with dashcams.

"They protect innocent drivers like the Jetta driver and they highlight the perils we all face through the careless actions of many people on our roads."

A Highways England dashcam was able to educate fleets and motorists on the dangers of driving too close, as cars pile up on a motorway.

Highways England’s head of road safety Richard Leonard said: “This footage is a startling reminder about the dangers of driving too closely to the vehicle in front.

“It clearly shows that if you get too close to the car in front, you won’t be able to react and stop in time if they suddenly brake.”

This certainly took the savings crown as the dashcam reportedly saved this unlucky fleet £16,000.

Insurers were able to make an instant judgement on liability, thanks to this dashcam footage of a Nissan driver jumping a red light.

VisionTrack managing director Simon Marsh said: "The worrying thing about this case was that the red light jumping was so blatant - yet the Nissan driver was willing to pursue a personal injury claim for several occupants of the vehicle."

Officers chose to take no further action once they had viewed the footage and realised that the boy had caused the collision by playing chicken and the driver was blameless.

SmartWitness's international sales director Mark Berry said: "It happened on a rural road with no witnesses. Let's imagine what might have happened if it had not been captured on the camera.

The fleet driver captured vital evidence of road rage when a disgruntled BMW passenger hurtled a plastic water bottle at the windscreen. The offending vehicle drives away, but the dashcam captured its details.

VisionTrack managing director Simon Marsh said: "The best way to protect your no claims is to invest in a dashcam. The camera never lies and footage provides the ultimate protection in the event of a disputed claim where you are the innocent party.”

A quarter (25%) of drivers would like to see dashcams made compulsory in cars, new research from GoCompare Car Insurance suggests.

Police get funding to use dashcam evidence

Measures to combat road rage and encourage more mutual respect between road users have been released in a two-year Government action plan.

New footage released by Highways England shows the dangers of driving too close as motorists are urged to #staysafestayback while travelling on England’s motorway network.