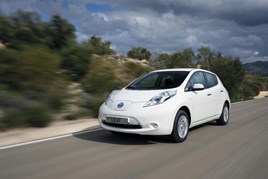 More than two thirds (69%) of company car drivers said they would drive an electric vehicle (EV) if they were offered one by their employer.

The research, commissioned by Go Ultra Low, was revealed yesterday (November 7) at the Go Ultra Low ‘Future of the Car’ Summit, in London.

Currently only 25% of business offer electric company cars to employees but the survey found that in companies where EVs were offered, 86% of respondents said they would consider an EV next time around.

In the first 10 months of 2016, more than 30,000 electric cars were registered across the country – with approximately 70% going to UK businesses. Government data shows that 940,000 company cars are currently registered to businesses in the UK.

Transport Minister John Hayes said: “Businesses have a role to play in boosting the numbers of electric vehicles on our roads, and this survey shows that employees want to drive them. Gradually making fleets zero-emission would improve air quality, as well as helping companies reduce their costs.”

Speaking at the Go Ultra Low ‘Future of the Car’ Summit, Poppy Welch, head of Go Ultra Low, said: “Fleets and businesses represent the lion’s share of the UK’s new car buyers, so have the potential to shape the market and accelerate the UK automotive market to be entirely ‘ultra-low emission’.”