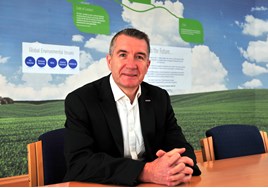 Electric and hybrid cars now account for almost 20% of the 170 company vehicles at Panasonic UK.

Panasonic had 19 plug-in hybrid electric vehicles (PHEVs) on fleet in November 2016, with three more on order, plus a further 10 standard hybrids.

Debbie Jenkins, general manager, customer relationship management at Alphabet, one of Panasonic's key suppliers, said: “Its use of PHEVs and hybrids is five to six times greater than other comparably-sized corporate fleets."

Fleet strategy at Panasonic is driven by Jason Plummer, senior manager in the general affairs department.

In his first year in the vehicle he covered 9,231 miles and spent just £129 on petrol, which equates to a real-world fuel economy of 337mpg.

A 50kWh solar electric array on the roof of the company’s head office at Bracknell, Berkshire, provides drivers and visitors with free EV charging at four bays in the car park.

Vehicle allocation policy is strictly driven by a vehicle’s suitability for its role.

If a driver’s mileage and/or journey profiles are inappropriate for a PHEV, Plummer steers them toward a conventional hybrid or a low-CO2 petrol or diesel car.

To choose an appropriate vehicle, drivers can refer to a tax benefit calculator tool created by Plummer. It allows them to compare the total cost of the impact of CO2-driven taxes on up to eight vehicles.

The company discourages staff from taking a PHEV primarily for tax purposes, however. It recently switched a driver from a PHEV into a diesel for that reason.

As well as drawing on Alphabet’s expertise in EV deployment through the AlphaElectric solution, Panasonic uses Alphabet for vehicle supply and administration, and driver risk management.

The company has not had a fleet manager since 2013. An in-house administrator handles the day-to-day needs of the fleet with close support from Alphabet.