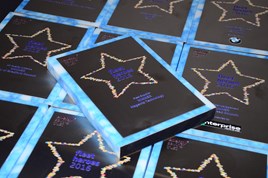 Ten companies were recognised for their efforts to reduce fleet carbon emissions, at the 11th annual Fleet Hero Awards.

An organic supermarket alternative that delivers direct from the farm and a zero tailpipe emissions courier service are among those to be named Fleet Heroes 2016.

The ceremony was held in the London Transport Museum by The Energy Saving Trust.

This year’s winners include Farmdrop, a to-your-door organic supermarket in London, which uses a fleet of electric vans to deliver groceries direct from the producers – be that fruit, vegetables, cheese, meat or dairy. It picked up the Ultra Low Emission Fleet award.

This year’s other winners were: