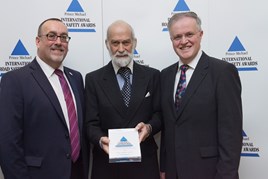 Transport for London (TfL) and the Freight Transport Association (FTA) were among those who have been recognised internationally at the Prince Michael Road Safety Awards.

The ceremony, which was established in 1987, took place on December 13 at the Savoy, London.

Prince Michael of Kent awarded TfL the International Road Safety Award for its work, and promising results, in reducing death and serious injury.

Analysis of police collision and travel demand data led TfL to put in place a range of initiatives which contributed to a 3% drop in the number of people killed and seriously injured on London’s streets (2,092) in 2015, its lowest ever level.

Leon Daniels, TfL’s Managing Director of Surface Transport, said: “We are delighted to receive this award which recognises the hard work our teams have put in to reduce casualties on London’s roads, however any death or serious injury is a tragedy, and our priority is to eradicate such incidents. Last year saw the lowest level since records began, but there is much more to be done.

“We are working to reduce collisions involving all road users by creating more attractive, accessible and people-friendly streets, making walking and cycling safer, working with London boroughs to introduce more 20mph limits, looking to remove the most dangerous Heavy Goods Vehicles from the Capital’s roads by 2020 and continuing our road safety education and enforcement programmes.”

Mark Cartwright, head of vans at the FTA, said: “Van Excellence has, with the commitment of many of the UK’s leading van fleet operators, become an aspirational goal for fleets of all sizes and sectors.  Its straightforward and practical approach, focusing on safety and compliance, recognises operator excellence as well as providing a framework for improvement.”