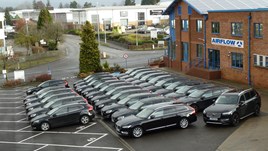 High Wycombe-based ventilation solutions manufacturer Airflow has taken delivery of its first Volvo V90, increasing the number of vehicles in its Volvo-only fleet to 31.

Having run a fleet comprised solely of Volvos since 2011, the V90 joins Airflow’s existing range of vehicles which includes V60s, V40s, S60s and, more recently, the XC90 T8 Twin Engine.

Airflow placed its first Volvo order in 2011, opting for the V50 D2 ES. From then, the partnership has grown: it made three orders in 2015, increasing to 14 last year, of which 10 were V60 Business Editions.

The V60 has been a popular choice with fleet and company car drivers, most notably since the introduction of the D2 Business Edition and the D5 and D6 Twin Engine models to the V60 family.

Alan Siggins, managing director of Airflow, said: "As an SME, we made the decision to work with one manufacturer to provide the team with all fleet vehicles.

“Volvo instantly became a front-runner in our choice of vehicle as its cars deliver the latest technology in a user-friendly manner, with a long-standing heritage in safety.

“As a business we're more than aware of our obligations to our staff and their safety while at work. Unfortunately, we've had three staff members involved in serious rear-end crashes where, in all instances, the cars had to be written off. All our drivers walked away with no serious injuries and their time away from the business was minimal, thanks to Volvo’s safety, build quality and technology credentials.

"Even though Volvo is a large global brand, we still have the feeling that our UK SME business is important to it. It’s a company we’re proud to be associated with."

The new V90 is fitted with an array of advanced connectivity features, including the Volvo On Call smartphone app which allows the driver to locate, lock and unlock the vehicle, send destinations to the navigation system and track business mileage.

Meanwhile, the Business Edition, currently available on the smaller V60 and S60, comes with Sensus satellite-navigation with traffic information, cruise control, rear parking sensors and Bluetooth. It also gets Volvo’s advanced City Safety technology, which includes automatic emergency braking, while the car’s ergonomic seats and sophisticated climate control with interior air-quality system will keep them comfortable. This is on top of the Business Edition’s exceptionally low CO2 and BIK figures, all of which makes it such a popular choice with company car drivers.

Airflow Developments Limited, a British company established in 1955 has flourished into a multi-million pound international manufacturing and research group, with subsidiaries in Germany and the Czech Republic and distributors from Norway to New Zealand. Airflow has earned its reputation as a world leader in ventilation solutions by continually providing innovative, high-quality and reliable products.