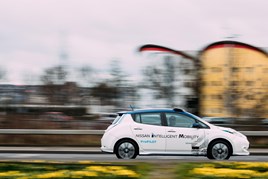 Nissan has demonstrated its latest autonomous drive technology in the east of London, the first time it has conducted these tests on public roads in Europe.

Participants in the passenger and rear seats were given the opportunity to experience the technology, which consists of millimeter wave radar, laser scanners, cameras, high-speed computer chips, and a specialized HMI (Human Machine Interface).

All of this helps allow the vehicle to operate in an autonomous manner on both highway and city/urban roads including runabouts once the destination points are entered into the navigation system.

Takao Asami, senior vice-president, research and advanced engineering at Nissan, said: “Innovation and ingenuity is at the heart of the Nissan brand and its people.

"This test of Nissan’s forthcoming autonomous drive technology in the demanding conditions of London streets underlines our commitment to delivering Nissan Intelligent Mobility to our customers.”

The London test follows recent announcements that both the updated Qashqai and the new Nissan Leaf, both coming in the near future, will be equipped with ProPilot autonomous drive technology to enable single lane autonomous driving on motorways.

Meanwhile, last year in Japan, Nissan launched the Serena, its first model to be fitted with ProPilot. In December ProPilot autonomous drive in the new Nissan Serena won 2016-2017 Japan Car of the Year Innovation Award.