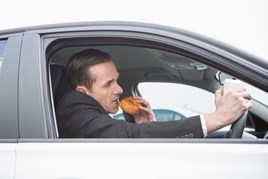 Road safety and breakdown organisation GEM Motoring Assist is urging drivers to avoid eating and drinking while at the wheel.

Attempting to eat or drink while driving is a distraction estimated to double a driver’s risk of being involved in a crash, according to research from Brunel University.

Additionally, the driver could be prosecuted for not being in proper control of their vehicle, an offence punishable by a £100 fixed penalty and three points on their driving licence.

There is also the risk of being prosecuted for careless driving.

Neil Worth, GEM road safety officer, said: “The Highway Code tells us that we must avoid distractions such as eating and drinking when we are driving.

"That’s because anything that takes our attention away from the driving task will increase our risk of collision.

"However, too many drivers don’t see it as a problem to unwrap a pasty, sip a scalding hot coffee or glug from a large juice carton on a journey.

“Driving is a complex enough task already. So trying to do anything else at the same time just makes the journey riskier because we’re not fully focused on driving.

"If something then goes wrong, we’re likely to react more slowly because our attention is elsewhere – and when we do react, there’s the food item or beverage to deal with, too.

“Good, experienced drivers accept that eating and drinking at the wheel are dangerous, so they won’t allow these distractions to compromise safety.”