The AA telematics trial predicts a third of faults before breakdown 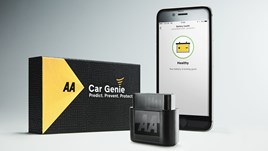 The AA is to launch a new plug-and -play telematics product, after a successful year-long trial prevented more than a third of vehicle issues becoming roadside breakdowns.

Connected units were installed into the on-board diagnostics (OBD) ports of 10,000 member vehicles of a mix of customers and staff. While specific learnings from the trial have fed into The AA’s ‘known fixes’ and technical knowledge database, the ongoing benefit primarily comes from live reporting of fault codes, and the system’s direct link to The AA’s control and despatch centre to rectify issues.

It has discovered that if fault codes on certain vehicles are not addressed they will lead to a breakdown within a short period of time.

Gareth Adams, connected car manager at The AA, explained: “Since April 2016, we’ve generated a huge amount of data from the trial – everything from fault codes, to driver behaviour, and actual breakdowns.

“What we’ve been doing in that time is analysing the correlation between the fault codes and breakdowns recorded by drivers on the trial. In about 38% of cases, we could see there was a fault code directly related to the breakdown.”

The top three faults in cars identified by The AA were with the ignition coil, exhaust gas recirculation (EGR) valve and mass airflow sensors. Knowledge of the specific problem then allows the driver to get any issue rectified swiftly, by reducing diagnostic time.

The system has also allowed The AA to call drivers to give direction over the phone on how to clear their diesel particulate filter blockages.

“We’ve identified several of these situations where there’s no cost to the driver to get these faults fixed; however if they had left them unfixed it would have likely resulted in a call-out and/or repair,” said Adams.

The AA sees the system as an opportunity to prevent and reduce ‘avoidable’ call-outs from using its patrols in an emergency.

One popular feature is a battery drain alert that will send a push notification to a member if they’ve left their headlights on, once their battery has reached a certain level.

Degradation of battery quality was also a commonly identified issue, with The AA able to book an appointment to replace the battery and attend at a convenient time with the right part on board.

Combined, battery-related issues make up around 16% of The AA’s breakdown workload.

The AA is also acting as a first notification of loss helpdesk, calling drivers after any serious impact.

Adams said: “We are well placed to provide recovery services, as well as arranging immediate onward recovery to the final destination.”

Members who took part in the trial, via a smartphone app, have also reported a number of the benefits of telematics. A third of users said the system has helped them to save money on fuel, while 47% said the driver behaviour prompts had helped them to become a ‘safer driver’.

The new product, called AA Car Genie, is available to AA members for £29 a year. The AA already offers a more traditional telematics package aimed at fleets, called AA Fleet Intelligence, which includes elements of the Car Genie package and starts from £14.99 a month.

It also plans to expand its connected car services in the sector further, offering the direct link into The AA’s technical help and breakdown response whatever the source of data.

“We know there’s a growing number of connected vehicles out there on British roads,” said Adams. “We have a long- to medium-term view that we will eventually be device agnostic in terms of our support, and we already do that with a number of embedded vehicle systems with manufacturers.”

The company also plans to link the service to an insurance product, offering an improved price to drivers with a better risk profile.

“Usage-based insurance is quite a mature use of the technology, but it’s one we’re keen to integrate into the same system,” said Adams.