Experts to debate future of diesel at Company Car in Action 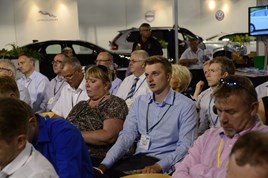 The future of diesel fuel on the UK’s fleets will be the focus of an industry debate to be held at this year’s Company Car in Action.

The issue will be covered in detail during presentations by four experts on Tuesday, June 13, the first day of the show.

Diesel currently accounts for more than 80% of the vehicles used by tax-paying company car drivers. However, debate is raging about future fuel choices for companies as diesel’s market share declines across much of Europe.

For the year to the end of April, diesel’s market share in the UK was down 6.4% compared to the same period last year, with demand being replaced by petrol and alternative fuel vehicles.

The debate at Company Car in Action will look at the challenges facing fleets, as diesel cars still tend to have lower company car tax bills and offer the best fuel economy for high mileage use.

The debate will hear from Jayson Whittington, chief car editor of Glass’s, part of Autovista Group, who will reveal how diesel residual values are performing in the changing market.

Nick Molden, founder and CEO of Emissions Analytics, will also look at whether diesels are cleaner than petrol cars when comparing real-world emissions.

As fleets consider the potential for increasing use of alternative fuels, delegates will hear from Andy Eastlake, managing director of the Low Carbon Vehicle Partnership and Karl Anders, national EV and public sector manager, Nissan Corporate.

The debates are an added-value element to the day at CCIA, which is attended each year by hundreds of decision-makers representing fleets ranging in size from the smallest to the largest in the country.

The Great Debate at CCIA takes place at 10.30am each day of the two-day show and is held in the main exhibition area at the event.