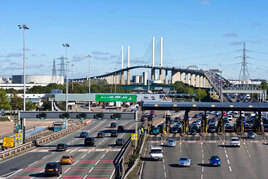 ACFO has hailed changes made to the Dart Charge online account to simplify administration for fleets as evidence that "real progress can be made when fleet decision-makers join together".

Fleet managers have complained of a huge increase in administration following the introduction in late 2014 of the 'free flow' Dartford Crossing charging scheme.

However, following months of discussions with ACFO, Highways England, which oversees Dart Charge on behalf of the government, has now completed the first in a three-phase series of improvements to online fleet account administration.

The first tranche of 17 changes to account features focus chiefly on the layout and information available relating to vehicles, crossings, payments and statements and an organisation’s account ‘home page’.

Further enhancements are expected to be made in August and September.

ACFO director Debbie Floyde, who has led the organisation’s discussions with Highways England, said: “ACFO has been working in conjunction with Highways England for several months to have the changes made for the benefit of Dart Charge account holders which will deliver increased administration efficiencies.

“Highways England made it very clear that it was prepared to engage in conversation with ACFO.

"We are delighted that Highways England has listened to the concerns raised by ACFO members and taken measures to instigate change.

“We will remain in dialogue with Highways England and continue to welcome feedback from ACFO members on Dart Charge administration, including the changes made to online accounts.”

Floyde added: “The work undertaken by ACFO highlights that real progress can be made when fleet decision-makers join together and promote their legitimate concerns.

"Ultimately, ACFO and its members want exactly the same as Highways England: a highly efficient and effective Dart Charge online account system that is fast and accurate and requires little administration.”

Further upcoming enhancements include the ability to pay for crossings on a specific date which is not currently possible, the ability for fleets to associate an individual cost centre to each vehicle registration number, and the removal of the advance warning letter currently issued to first offenders, which has previously led to levels of confusion.

At the event delegates will be updated on Dart Charge and a range of other issues including developments in respect of charges for the two Severn Crossing bridges which are due to revert to central government control at the end of this year or in early 2018, and the proposed new £6 billion Lower Thames Crossing which will connect Essex and Kent east of Tilbury and Gravesend with the aim of reducing the traffic burden on the Dartford Crossing.