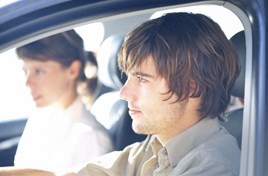 The number of young people with provisional driving licences has increased by 8% over the past four years.

However, at the same time a 6% fall in those becoming fully fledged young drivers has been recorded.

Among teenage drivers (17 to 19-year-olds), the number of provisional licences was up 10% over the same period while the volume of fully qualified drivers was down 8%.

RAC Black Box Car Insurance spokesman Simon Williams said: “Surprisingly, figures show both an overall drop in the number of people of all ages taking the test and a fall in the number of young people who are fully qualified drivers. This implies that an increasing number are not going on to take and pass their driving tests, and are therefore remaining as provisional licence holders.

“The cost of lessons and the number required to reach the necessary skill level to take the test has presumably played a part in this. With driving lessons now costing around £25 an hour and students possibly requiring 20 to 30 at a cost of approximately £500 to £750 it clearly can be a very expensive rite of passage.

“And then once new drivers qualify to drive on their own they somehow have to foot their car insurance bills of usually around £1,000 or higher. But while this is clearly not very appealing it would seem unlikely that it is putting young drivers off taking their tests.”

Looking at all age groups there was a 3% increase in the total number of full driving licence holders from 2012 to 2016 while there was an 8% rise in those with provisional licences.

Interestingly, the data also shows there has been a 6% decline in the number of full licence holders in their 40s, which equates to 471,395 fewer people. In contrast, there was no change in those with provisional licences in the same age category, with 1.3m having one in both 2012 and 2016.