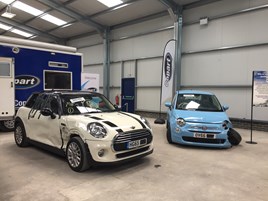 Businesses that self-insure their vehicles are being urged to prepare for changes to the code of practice for dealing with motor salvage, which take effect this October.

The code aims to help keep dangerous vehicles off the road and the British Vehicle Rental and Leasing Association (BVRLA) requires its members to adhere to it, although it is not currently a legal requirement.

Rental companies, in particular, need to understand and apply the code correctly as they typically self-insure and could be handling more than a thousand salvage vehicles per year.

Nora Leggett, BVRLA director of member services, warned delegates at its motor salvage workshop that “immense” reputational damage could occur if a vehicle was not categorised correctly and ended up back on the road, with the company listed as the previous owner.

Under the current code, vehicle salvage is categorised as: A – scrap; B – break (beyond repair but useable parts can be recycled); C – repairable (total loss vehicles where the repair costs exceed the vehicle’s pre-accident value so the owner chooses not to repair); and D – repairable (total loss vehicle where costs do not exceed the vehicle’s pre-accident value but the owner chooses not to repair).

The new code, which follows a two-year consultation and technical scrutiny from Thatcham Research, has “a greater focus on the condition of the vehicle rather than the repair costs”, according to the Association of British Insurers (ABI), which co-ordinates the code.

Under the new code, those who categorise vehicle salvage will need a formal qualification, and will be given a unique identifier, which will need to be entered in the Motor Insurance Anti-Fraud and Theft Register (MIAFTR) from October 2019.

Designated technical bodies, such as the Institute of Automotive Engineer Assessors (IAEA), will administer the test for engineers to become appropriately qualified. The details of the test, who will provide it and how much it will be cost are currently being decided.

If a training course is required as a precursor to the exam, Thatcham Research will develop this course and make it available to engineers.

A half-day awareness course of the new code is currently available from Thatcham Research to help individuals understand the changes and how to interpret the new codes.

The new code is also available in full on the ABI’s website.

It contains a flow chart which outlines the decision-making process. 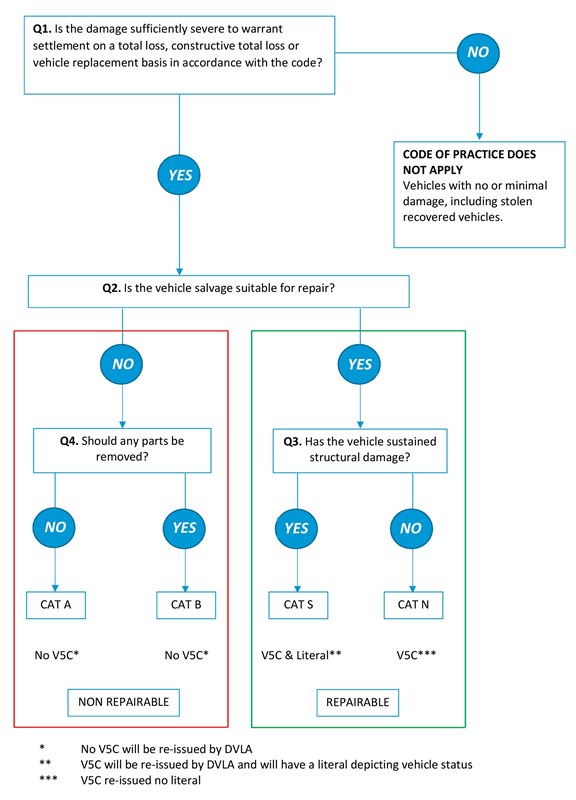 There is also a diagram to help engineers determine if a salvage vehicle is structurally damaged. 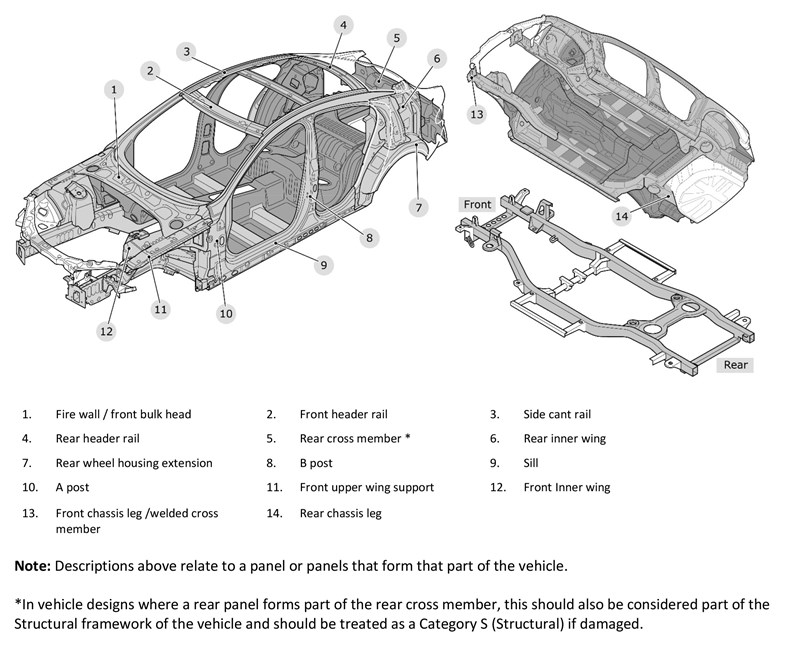 If any of the shaded/listed elements have sustained damage then the vehicles is considered structurally damaged.

However, the diagram is a generic guide and engineers will need to use their experience and will need to refer to the manufacturer's repair methodology.

Once the engineer has decided which category the vehicle falls into organisations will have two days to update MIAFTR. Currently, there is no timescale and delegates at the BVRLA workshop questioned whether two days was a realistic timeframe.

Organisations also have to be mindful that the current code will run in parallel with the new code from October 1, 2017 until October 31, 2017, and they will need to ensure that any current category C and D vehicles have been entered in MIAFTR by then otherwise they will have the cost of re-engineering them under the new code.

A category S vehicle will have its vehicle registration certificate (V5C) re-issued but the Driver and Vehicle Licensing Agency (DVLA) will add a marker to show it once had structural damage and this will stay with the vehicle for its life.

What are the implications of the new motor salvage code?

Concerns were raised at the BVRLA workshop as to what impact having a marker on the V5C will have on vehicle returns.

Laura Moran, automotive sales director at online auction provider Copart, which specialises in selling accident damaged and salvage vehicles, told delegates: “Our belief is that structurally damaged vehicles will be seen as less attractive. Would you buy a used car for your son or daughter that has got a V5 marker that has the term ‘structural’ on it?”

However, she added that non-structural vehicles were likely to be worth more.

“You're going to have variations of damage across those as well so focus on getting the imaging right, presenting them correctly and making sure you achieve the right value for those vehicles in the marketplace,” Moran said.

She added that the £500 million that is currently spent in the salvage marketplace will still be there on October 1.

“The money will still exist, there are still going to be buyers out there,” she said. “Ultimately, we believe through auction it will be a self-levelling marketplace. Overall, returns on non-structural vehicles may be up, structural may be down, it will probably level itself out.”

Categorisation of vehicles may still be made using images via desktop engineering but Copart estimates that the new categorisation codes will result in one in four vehicles requiring a further follow-up physical inspection.

A mobile assessor could charge £100-£150 but costs will vary, depending on factors such as where the vehicle is based.

Physical inspections also have the potential to extend the defleet process, particularly for organisations that do not have their own in-house engineers.

However, Leggett suggested it could be beneficial to use an engineer’s expertise to assess vehicles and could result in a decision to repair a vehicle safely rather than simply write it off.

“By elevating it to that technicians field we’re adding a dimension that hitherto we didn’t have,” she said.

Nigel ‎Paget, chief executive officer at Copart – Europe, agreed that a physical inspection could be better because an engineer working off images was likely to “err on the side of caution” and may class a vehicle as structurally damaged when in fact a physical inspection could reveal it was non-structural damage. Conversely, there could be structural damage which was not evident from a photograph.

Ahead of the new code, leasing and rental companies need to consider any service level agreements they may have in place with customers where they have to charge them for damage within a certain period of time.

“The sooner you charge someone for damage the better chance you have of recovering it,” Moran said. “Any lengthening of that process is going to increase your risk of non recovery.”

Companies will need to check customer contracts with regards to the settlement on total loss vehicles.

Sales teams, claims teams and the leasing or rental company’s supply chain will also need to be made aware of the changes to the code.

Buyers are becoming aware of the changes but further education is required.

“We're starting campaigns over the next two months in the lead up to October to try and bridge that gap for people that don't know,” he said. “Our buyers are starting to hear about it but they don't yet understand it and they'll make their own assumptions. We want to educate them.”

Paget suggested that the term ‘structural’ was not that helpful to the consumer because it may not be clear to them that the vehicle was repairable.

What about poor quality repairs?

A member of the BVRLA expressed concerns that the code does not address the issue of poor quality repairs. They would like to see a requirement for an appropriately qualified person to inspect the vehicle after repair, prior to it being returned to the road

‎Paget agreed that this would be a good move.

“If it was written off as a structural and then repaired and then it was inspected it would increase the value to the end user because the consumer would have confidence so we think that would be a great thing to do,” he said. “It’s common in states in the US that that type of vehicle does need to be inspected, similar to an MOT, and we did put forward that that should be part of the code but it didn't make the cut.”

However, Ben Howarth, senior adviser for motor and liability at the ABI, said that such an inspection would be “outside the remit of insurers”.

“Regulating the quality of vehicle repairs would be a matter for the repair sector to do voluntarily, if they felt it was needed or for the Government, if it felt appropriate,” he said.

As to whether any further changes will be made to the code following its introduction, Howarth said: “This code is the final version for now but things can move fast, particularly with vehicle technology, and the industry will be open to considering further updates in the future when required.”