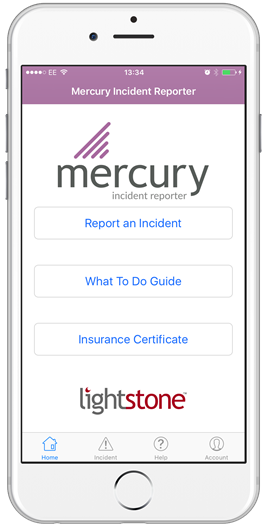 Lightstone has launched Mercury Incident Reporter, a new smartphone app which can assist drivers involved in an incident and automatically send details of the event to the fleet manager in real time.

The company says the app improves information gathering, speeds up any subsequent claim and provides proof of compliance for fleet managers.

“The philosophy behind this system is two-fold: to make life easier for people who have been in a bump and to help drive down insurance costs,” said Nick Parkinson, head of operations at Lightstone.

“We developed this because none of the other apps really analysed the problem and looked at what happens after a crash, step by step.

“Often people are completely flustered, they often forget things. The idea behind this is to walk them through the process and make sure they don’t miss information.”

Users are prompted to input accurate information about damage to vehicles, third parties, passengers, witnesses and police attendance coupled with notes, photographs and video recordings direct to the fleet manager, potentially within minutes of the incident occurring.

It includes an automatic vehicle registration number lookup tool, address lookup, incident location pinpointing, uploading of dash-cam video and roadside recovery telephone number. Details of an incident recorded by the app are automatically delivered to the fleet or transport manager via a secure, cloud-based management portal.

Guidance is provided within the app for drivers unsure on how to proceed following an incident – this can be customised by the fleet manager. The app can also be adjusted include specific questions to suit individual accident management policies.

Fleet insurers say it currently takes an average of 23 days after an incident has occurred before they’re informed.

The Association of British Insurers said: “Any additional information that can help verify the circumstances of an incident, can help drivers and insurers in dealing with a claim.”

According to Lightstone, if basic information regarding the incident is not collected – or later turns out to be incorrect or not accurate – assessing liability and settling claims becomes an extended process leading to increased settlement costs and, ultimately, fleet policies costing more.

The app will be available to download for free from mid-August 2017.

The Fleet Operator Recognition Scheme (FORS) has welcomed a new tailored approach to fleet insurance, as set out by Abaco Insurance Brokers.

Total Motion has launched a new drivers’ app aimed at ensuring businesses are compliant with the law, as well as reducing costs and keeping employees safe.