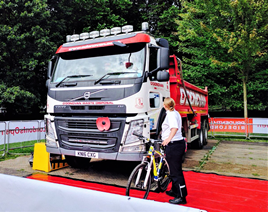 O’Donovan Waste and Metropolitan Police have partnered to join HGV drivers and cyclists together during National Lorry Week.

The event, which runs between September 11 and 16, is an opportunity for drivers and cyclists to swap perspectives.

Cyclists can sit in the cab of a lorry and watch as another cyclist travels alongside the HGV to the front of the vehicle, allowing the cyclist in the HGV to see exactly where the blind spots occur.

“It is important for hauliers to collaborate with road users so that both have a joint understanding of the others’ experience and expectations.

“As an SME, we are extremely proud of the time and effort we put into this collaborations and feel that it promotes mutual learning that is beneficial to all involved.”

Sergeant Asad Ikram, from the Met’s Cycle Safety Team, said: "The Met aims to reduce collisions and the number of people killed or seriously injured on London's roads, enforcing traffic legislation robustly and at every opportunity.

Our award-winning Exchanging Places programme helps to contribute towards road safety by educating cyclists about how to safely position yourself alongside other traffic, particularly vans, trucks and heavy goods vehicles.

"We thank O'Donovan's for providing their staff and HGVs when called on for the Exchanging Places events.”